As its name implies, DTG’s diversified capabilities include being a full-service manufacturer of prototype and production stamping dies, low-volume stamped parts and assemblies, as well as fabrication, machining, and assembly of highly-engineered components.

DTG is a privately-held company with third-generation management. “In 1973, my father started this business in a small 5,000 ft2 (465 m2) shop with three employees making tooling aids for copy mills and stamping dies,” said John J. Basso, owner and president. “I came on board in 1975. Fast forward to today and my son John Michael Basso is also an owner and vice president in the company, and we have grown to four companies with a total of 775,000 ft2 (72,000 m2) of engineering and manufacturing floor space with 425 highly-skilled employees.”

Diversified Tooling Group’s four affiliated companies include Superior Cam, Midland Design, Bespro Pattern Inc. and American Tooling Center Inc. With the integration of these four companies, DTG has the capability to supply complete tool and die service to its customers. “Prototypes are made at Superior Cam, the production die designs are made at Midland Design. The patterns are made at Bespro Pattern, and the production stamping dies are made by American Tooling Center. And those dies are sold to North America’s major automotive OEMs,” said Mike Austin, director of manufacturing engineering.

“We are a Tier 1 tooling supplier. Most of the parts that we make today with our tools are the large Class A parts that are the visible parts of an automobile or a heavy truck where there is a requirement for high surface quality,” said Austin. “The other part of our business is in the defense sector. We became involved in the defense business 20 years ago to round out our business and make use of excess capacity that naturally occurs in the tool and die business. We started making the parts that would be installed on ground defense vehicles. We began by making armor plate and heavy sheet metal. And this was one of the first applications for us in laser cutting with Prima Power. Because we were supplying thinner gage steel plate that would be used in various defense vehicles, we needed to have 2D laser cutting. And we also needed a laser for 3D laser cutting for trimming and piercing holes.”

“By 2014, we needed a large and fast five-axis laser to support our hot stamping press,” said Basso. “When we evaluated the machines, we compared the Prima Power Laser Next to the competing five-axis machines and robotic laser cutting. We tested each of these machines for ease of setup, ease of programming, the accuracy of the cutting, how fast we could do the trim lines, the ease of maintenance, support from the manufacturers, the technical level of the machine and the overall cycle time of the machine. The Laser Next was selected because it clearly beat the competition in almost every category,” said Basso. 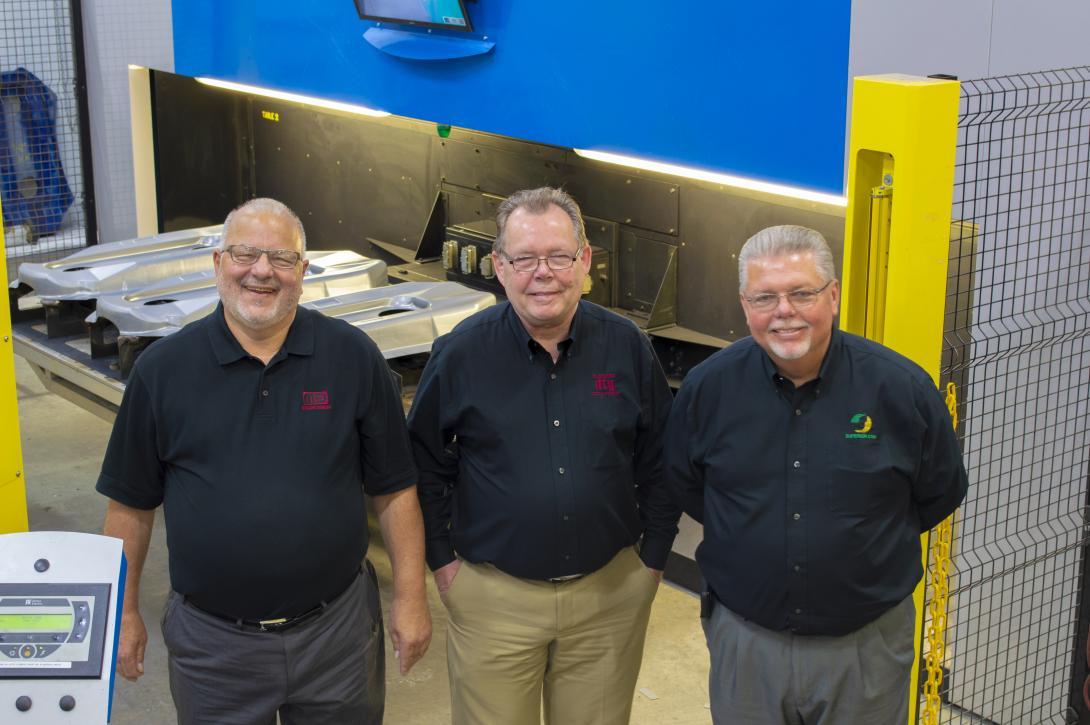 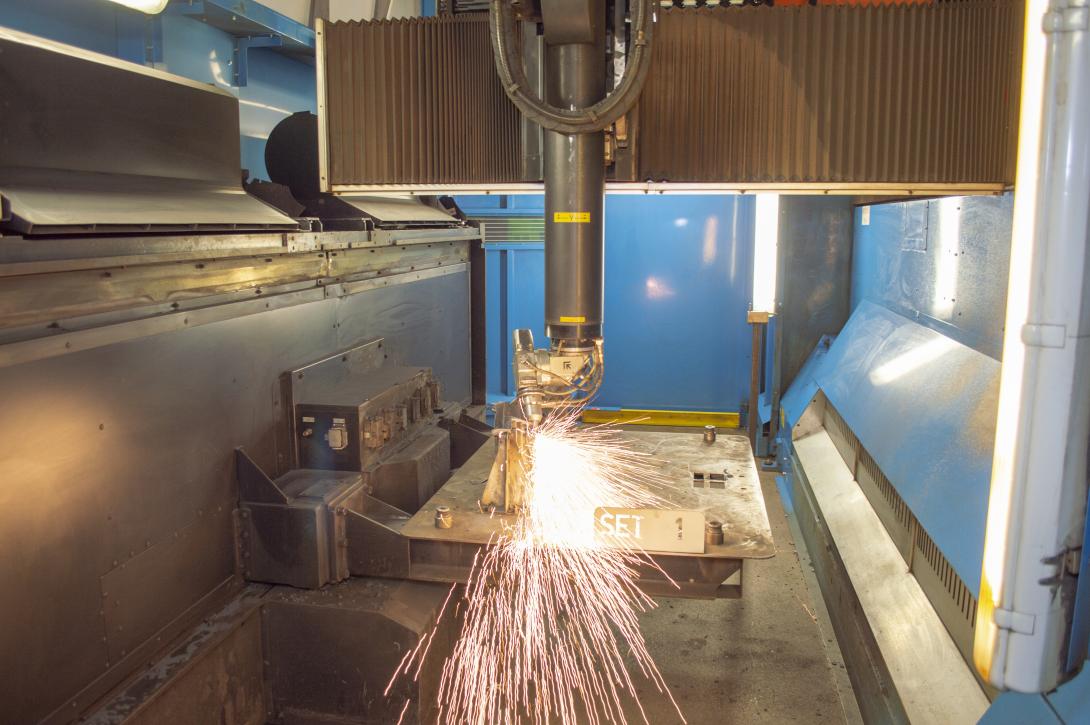 DTG went to the FABTECH show that year and purchased the first Laser Next that was sold in North America and installed it at American Tool Center. “Once we installed the Laser Next 1530 and started using it for tryout and development of the process, we were amazed at how fast the machine was,” said Austin.

“It was light years beyond anything we had dreamed of. In terms of performance, the robot took over two minutes to cut the part, the competing five-axis laser took over one minute to cut the part. The Laser Next cut it in 45 seconds. That difference in performance put the decision over the top. That, and the history we had working with Prima Power for so many years, made it an easy decision,” he said.

Prima Power designed the Laser Next to meet the automotive production needs for specialized products for cutting sheet metal parts. The Laser Next maximizes machine uptime by simplifying and reducing maintenance to reduce non-productive times and the need for specialized resources dedicated to these activities.

Laser Next has a working range of 3,050 x 1,530 x 612 mm and is equipped with either a 3 or 4 kW high-brilliance fiber laser. Its compact focusing head is fully sealed for best protection. Features include direct-drive motors, a double protection Safe Impact Protection System (SIPS), fully-metallic sensor and Focal Position Control. The high-precision and dynamic turntable with servo motor and absolute encoder is designed to ensure the highest reliability, safety and ergonomics, according to Prima Power. With the blocking times, the distance between table and light curtains is short, allowing faster and more comfortable loading/unloading operations in full safety.

At DTG, according to Austin, the Laser Next 1530 is primarily used for the hot stamping part of the company’s business, including R&D work, prototype work, production tool tryout, and process development, including laser cutting development and low-volume production.

“We learned from the Laser Next 1530 that the turntable was a major benefit to minimize the lost time of loading and unloading. The machine is down a minimum of time to load and unload parts. Our cost of laser cutting very much depends upon keeping that beam running. It is very seldom that you will see it running without tooling on both sides of the table so that we minimize load/unload time,” Austin said.

“At American Tooling Center, the Laser Next 1530 is cutting some heavy gage exotic material,” said Basso. “Its main focus is on the hot stamping material, which is a different grade of steel. That machine has stood up to the speed requirements. All the hot stamping parts by necessity have to be laser trimmed. You can’t use any trim dies. That machine has been holding up great to all the production we have,” he said.

In 2016, another DTG company, Superior Cam, needed a very large five-axis laser to prototype body sides. “We purchased a larger envelope Laser Next 2130 to fit the job requirement,” said Basso. “Both of our Laser Next machines have been durable, dependable, and the speed and accuracy have been excellent. There has been very little downtime. They have run very true.” According to Frank Delkov, plant manager of Superior Cam, prior to the Laser Next 2130, the company had two CO2 lasers running production on door assemblies for a Class A truck. “We had one machine making left-hand door outers and another machine making right-hand door outers. We moved this job to the Laser Next 2130.”

“We now run both the left and right-hand door outers in one fixture on the Laser Next. What took us over three minutes per door outer now takes us 30 seconds,” said Delkov. “The improvement in productivity has been enormous,” he added.

“The cut quality is excellent and we are doing that with nothing more than high-pressure shop air. No specialty gases are needed. That’s huge. It’s simple, effective, and the quality is excellent. The Laser Next is also a user-friendly machine. We do all our training internally between our operators; in a matter of a few weeks, we can take someone off the floor and have them operational on the Laser Next.”

“The Laser Next’s accuracy, repeatability, and precision have allowed us to replace some dies and pierced dies with laser cutting,” said Basso. “That makes the process more competitive for our customers. In many cases we supply our customers with parts and tooling that allow them to make low-volume parts that they otherwise would not be able to make. Some of those parts are cold stamped parts and others are hot stamped parts, but if we didn’t have the laser cutting, we wouldn’t be able to afford the tooling to make those parts. The laser cutting, combined with the accurate and repeatable Prima Power Laser Next 2130 and 1530, allow us to eliminate the tooling cost for trim and pierce dies for cold stamped parts, reducing investments for low-volume production. Production costs are comparable to a die complete process,” Basso explained.

“This has opened up new lines of business for us in automotive, truck, defense, and specialty areas. It is a manufacturing process that we previously only had used for prototype. And as new processes are introduced, we know that Prima Power will be there to support us,” Basso concludes.

We now run both the left and right-hand door outers in one fixture on the Laser Next. What took us over three minutes per door outer now takes us 30 seconds. The improvement in productivity has been enormous!