30+ Years of experience and still growing 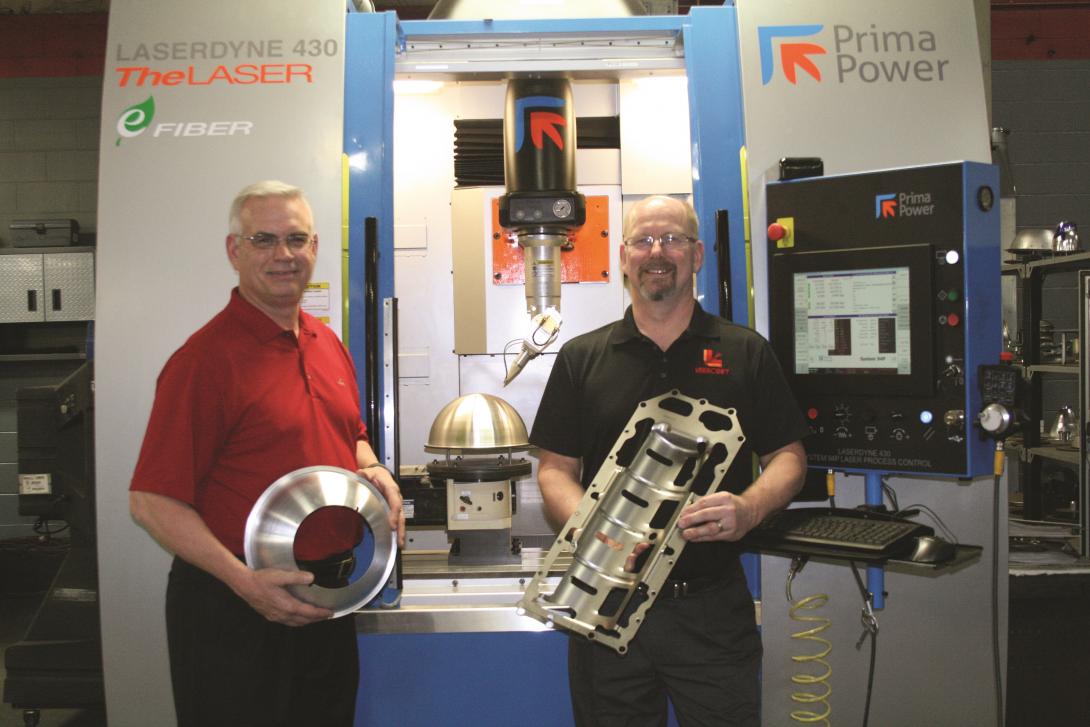 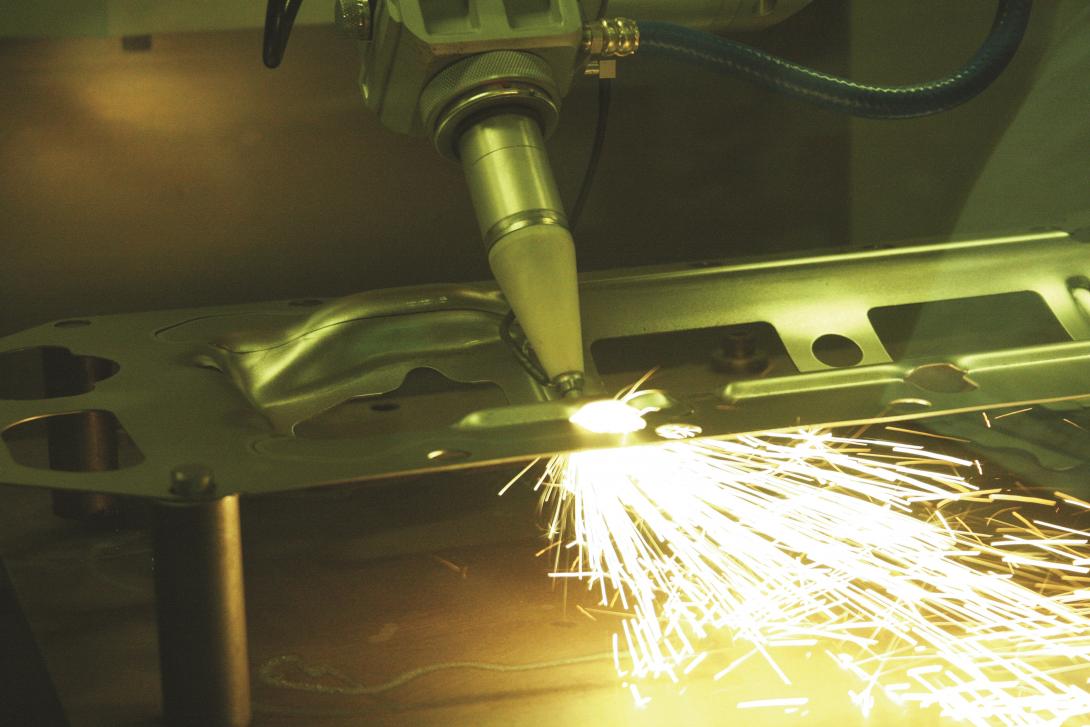 North Ridgeview, Ohio: There’s flat laser cutting and then there’s complex 3D cutting using a 5-axis laser cutting system. No one knows both the flat and the 5-axis processing variety better than Lasercraft USA Incorporated. (Photos One and Two)

For 30 plus years, the company has provided superior quality parts, specializing in formed metal parts with laser cut features to demanding customers as diverse as metal spinning and metal stamping. To further these capabilities, Lasercraft recently made a major addition to its laser technology. Lasercraft’s drive for responsiveness, continuous improvement and superior quality is a normal part of their business process and expect their suppliers to have a similar mindset.

Most Lasercraft’s projects call for laser cutting custom designed formed parts with complex geometries. This is work metal spinners and metal stampers often prefer to subcontract to a specialist like Lasercraft because it requires special skill and equipment. As a long time user of a LASERDYNE® 780 and LASERDYNE 790 system, Lasercraft developed this expertise using LASERDYNE’S 5-axis capabilities. Recently, the company recognized new opportunities with LASERDYNE’S latest technology. Originally thinking the LASERDYNE® 795 with BeamDirector® system would handle its laser processing needs, after a trip to the factory and seeing both the LASERDYNE 795 and LASERDYNE 430 systems operate, Lasercraft decided that the LASERDYNE 430 with BeamDirector® would best fit its needs.

Laser cutting features such as slots, complex hole patterns and precision shaped edges in contoured steel, aluminum and similar thin and thick metals can be slow, tedious and require close operator skill and attention using conventional processes. Using LASERDYNE’S five axes cutting abilities in those earlier machine systems proved to be the answer then. But by comparison, the latest multi-axis laser systems from Prima Power Laserdyne provide even faster and easier programming, with new operating flexibility, speed and precise quality with the opportunity to automate the process for longer part runs. (Photos Three and Four) 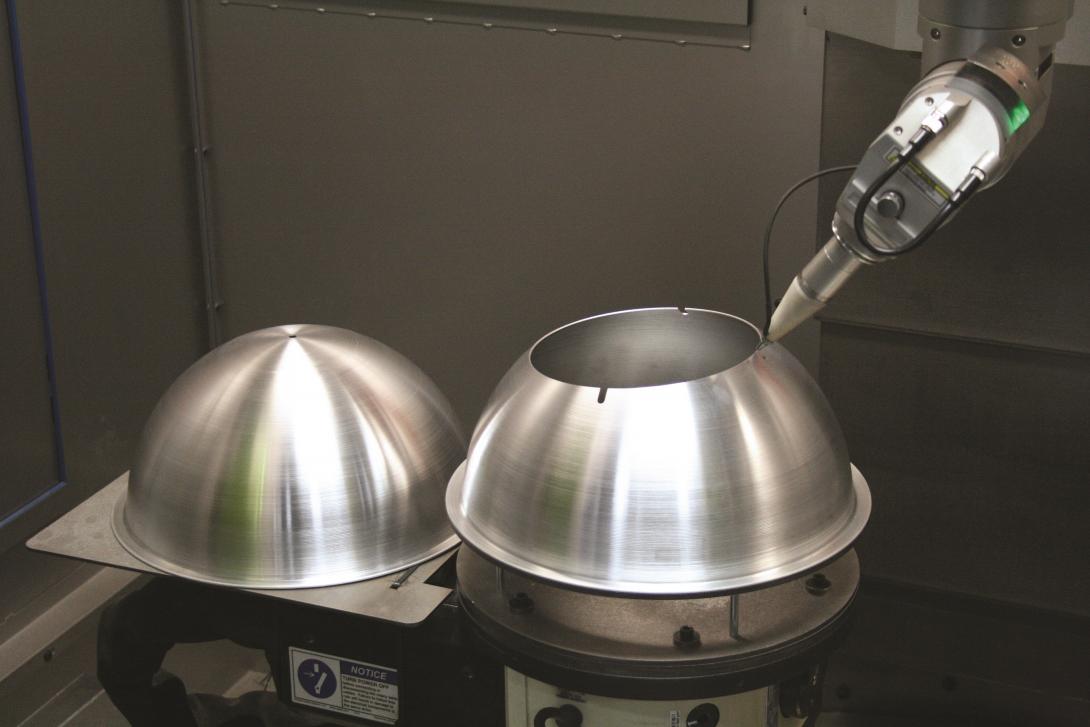 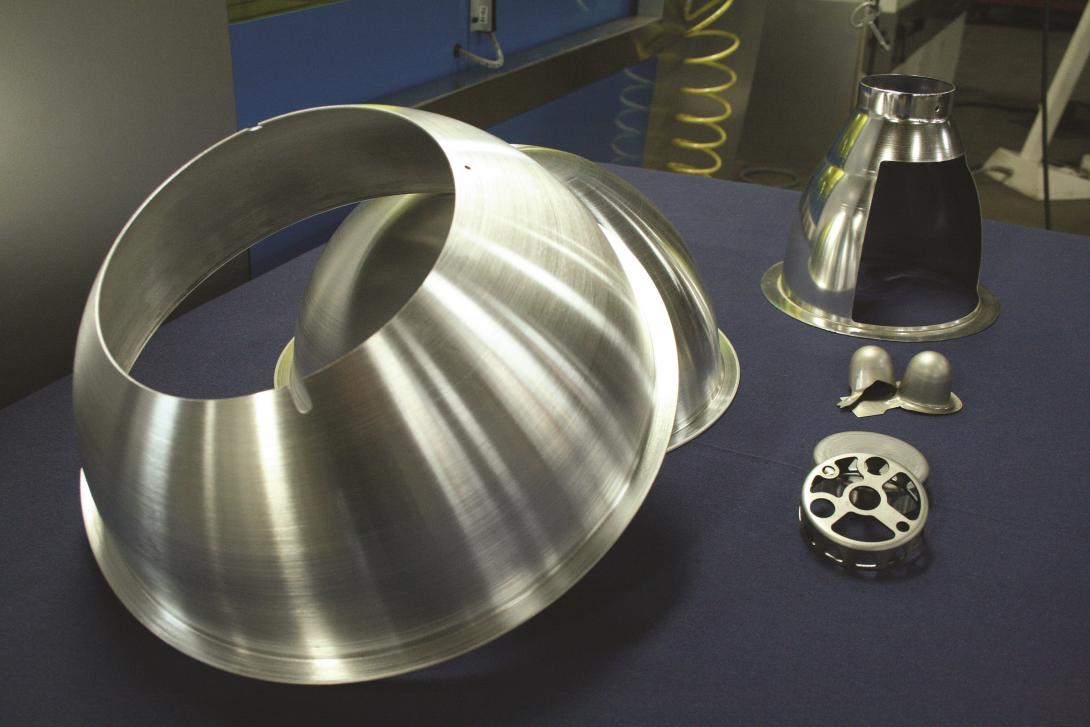 “When we saw the potential with Prima Power Laserdyne’s new 430 with BeamDirector® system and equipped with Fasttrim™ Software and SmartTechniques™, we made the decision to purchase a LASERDYNE 430 with the plan to add a second one soon after,” reported Gregory Claycomb, president of Lasercraft Incorporated. ”We were pleasantly surprised to see what the 5-axis LASERDYNE 430 with BeamDirector could do. It’s fast, flexible and provides the high quality processing that we needed to cut both small and larger formed parts. Since our part runs vary from a few prototypes to 10,000 parts a month, the system proved out to be an ideal addition to the 14 different brand lasers that we currently use.”

Lasercraft timed its purchase and installation of its first LASERDYNE 430 with BeamDirector system ideally to include Laserdyne’s recently introduced FASTTRIM™all-in-one software. It enables Lasercraft to model parts, define process paths, define feature locations and build part fixtures. It allows posting a complete program for 2D and 3D laser welding, drilling, but most appropriately, for Lasercraft’s complex and challenging cutting applications. While continuing to use the earlier LASERDYNE 780 and LASERDYNE 790 systems successfully, “the new 430 was a revelation for the productivity improvements it provided,” reported Mr. Claycomb.

Using the LASERDYNE 430 with BeamDirector® with the QCW laser and new FASTRIM software with full part simulation with collision detection allows Lasercraft programmers to eliminate potential issues before sending the program to the manufacturing floor. Auto programming automatically programs parts based on geometry of the model. To address Lasercraft’s complex formed part needs, FASTRIM software supports up to 6-axes simultaneously. It also provides the ability to modify tool paths through sheet offset, cutter offsets and axis translations.

Ed Farley, Lasercraft’s “shop floor guru” and laser expert marveled at the LASERDYNE 430’s performance. From the first complex cutting run of 10,000 parts for inclusion in new HEMI automotive engines to a half dozen prototypes for an appliance customer, Mr. Farley was impressed at the process improvements. “He was amazed, actually shocked, at all its productivity benefits including the rapid output of part information and fast programming capability. Ed’s been a key part of our 30-year success as has our team of 14 employees,” reported Mr. Claycomb. Ed’s seen and knows it all when it comes to Lasercraft’s laser capabilities.”

“It all began 20 years ago with Lasercraft cutting tubing and reflectors for the lighting industry,” said Mr. Claycomb. “Soon metal stampers came to us with stamped parts with hole requirements they couldn’t handle requiring 5-axis work with fast turnaround. Just last week, a customer came to us on a Friday morning with prototype parts needing hole placement. Using our LASERDYNE 430, we processed and delivered parts that Friday afternoon.” (Photo Five) 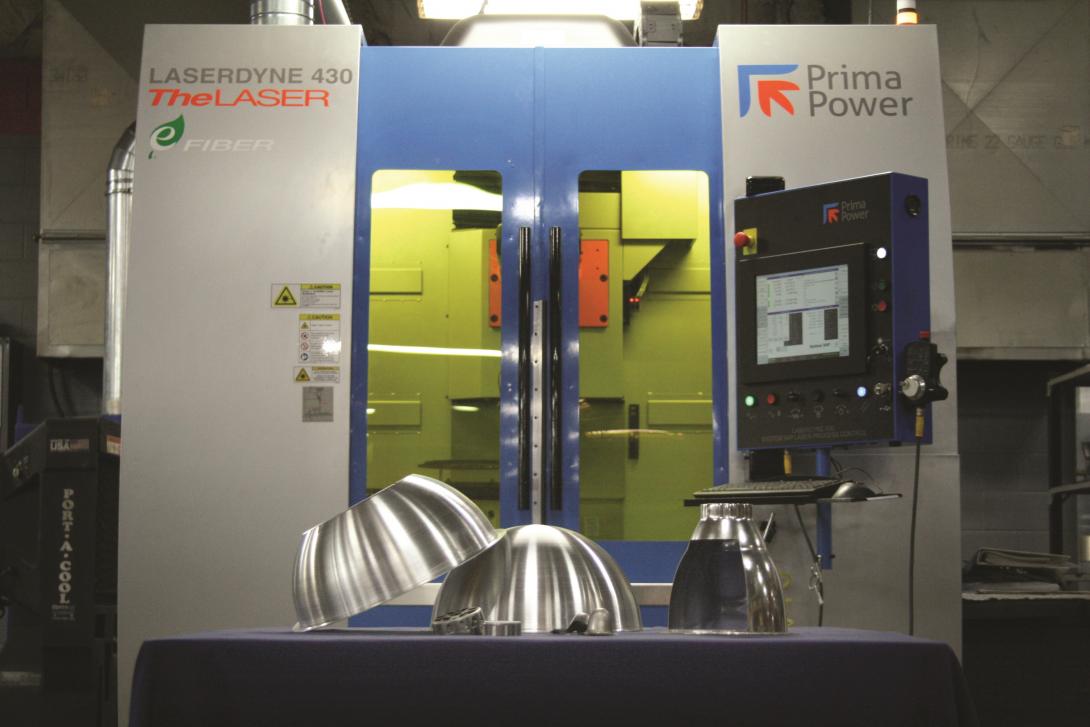 “From our beginning, we’ve included rotary tables on all three of our LASERDYNE systems. They provide needed flexibility for tubular, cylindrical and the formed parts we process,” reports Mr. Claycomb. “The system’s air-cooled 3000W peak power fiber laser and S94P software gives us full 5-axis capability to process contoured parts into difficult-to-reach part locations. Parts clamp up fast on the rotary table so parts are processed quickly and accurately with little or no operator intervention.”

Among the many SmartTechniques™ included in the LASERDYNE 430’s operating software, Smart Pierce™ stands out as an immediate productivity improvement for Lasercraft. With SmartPierce, there are no large pierce points and far less potential for part distortion. That’s particularly important on thinner metal-spun and stamped parts, both for accuracy and cosmetically correct appearance. The pierce time is very fast enabling cutting closely spaced features in thin metal without heat distortion. Also, there is less drilling spatter. Another nice feature that Lasercraft is starting to use are the standard focusing lens assemblies including right angle assemblies for processing inside cylinders having diameters as small as 60 mm.

SmartPierce works equally well on the wide range of materials that Lasercraft processes. This includes cold rolled steel, aluminum and stainless steel, from the thinnest materials that range from .060 to .120 inch to the thickest (from 11 to 16 gauge). Part diameters include the smallest to 14 inches in diameter.

Lasercraft Automation Now And For The Future

In addition to 5-axis laser cutting, Lasercraft designs, builds and operates automated machining processes for certain customers. The company has plans for automating its LASERDYNE 430 with BeamDirector (and a second one soon) for automated load/unload for its long run operations. “The LASERDYNE 430 system is designed for automation with easy access from front and both sides,” said Mr.Claycomb. “It’s really helped make our laser operations more efficient and productive at a time when our customers and the marketplace demand it.”

The LASERDYNE 430 system is designed for automation with easy access from front and both sides. It’s really helped make our laser operations more efficient and productive at a time when our customers and the marketplace demand it.