The Minerva Group in Bologna, Italy is a company that truly embodies skills, technology, and entrepreneurial spirit.

Clear ideas and determination are the traits that made it possible for Andrea Salati Chiodini, the Group’s CIO and technical manager, to focus on process automation in the workshop. This allowed the company to gain an edge over competitors in the highly-regulated world of machines for the food industry. This was achieved by the installation of the fully-automated and integrated Night Train Flexible Manufacturing System (FMS) by Prima Power, capable of producing a semi-finished product that is immediately ready for the next manufacturing steps.

Today, Minerva Omega Group, whose international reputation has been further strengthened with a modern, winning management system, can, therefore, boast one of the most comprehensive product ranges on the market, and a well-established customer portfolio with a presence in every food sector, in mass retail as well as through dealers in every country in the world. Salati Chiodini, together with his brother and sister, are the family’s third generation at the helm of this historic and long-lived industrial company.

Minerva Omega Group s.r.l. was established in 2012 from the merger of two historic companies, Minerva from Bologna and Omega Ceg from Varese. Both companies have a long history, tradition, and experience. La Minerva, which will celebrate 75 years in business in 2020, was founded in 1945 in Bologna, an area with a strong mechanical and engineering tradition, thanks to the entrepreneurial initiative of Mario Chiodini, the current owners’ grandfather. It designs and manufactures machines for meat processing, catering, the food processing industry, packaging centers, and offers a high-quality range of products with an excellent price-quality ratio and service life.

“We are one of the oldest family businesses in Italy,” explains Andrea Salati Chiodini.  “It is precisely due to this entrepreneurial leadership and a marketing-oriented managerial mindset that we led Minerva to acquire and incorporate some of our competitors: first Bologna-based Artex, then Omega, owner of other historic brands such as Ceg, General Machine, Regina, Suprema and, recently, Aria and Mincer2000, all brands that are well-known by experts in the field worldwide.” 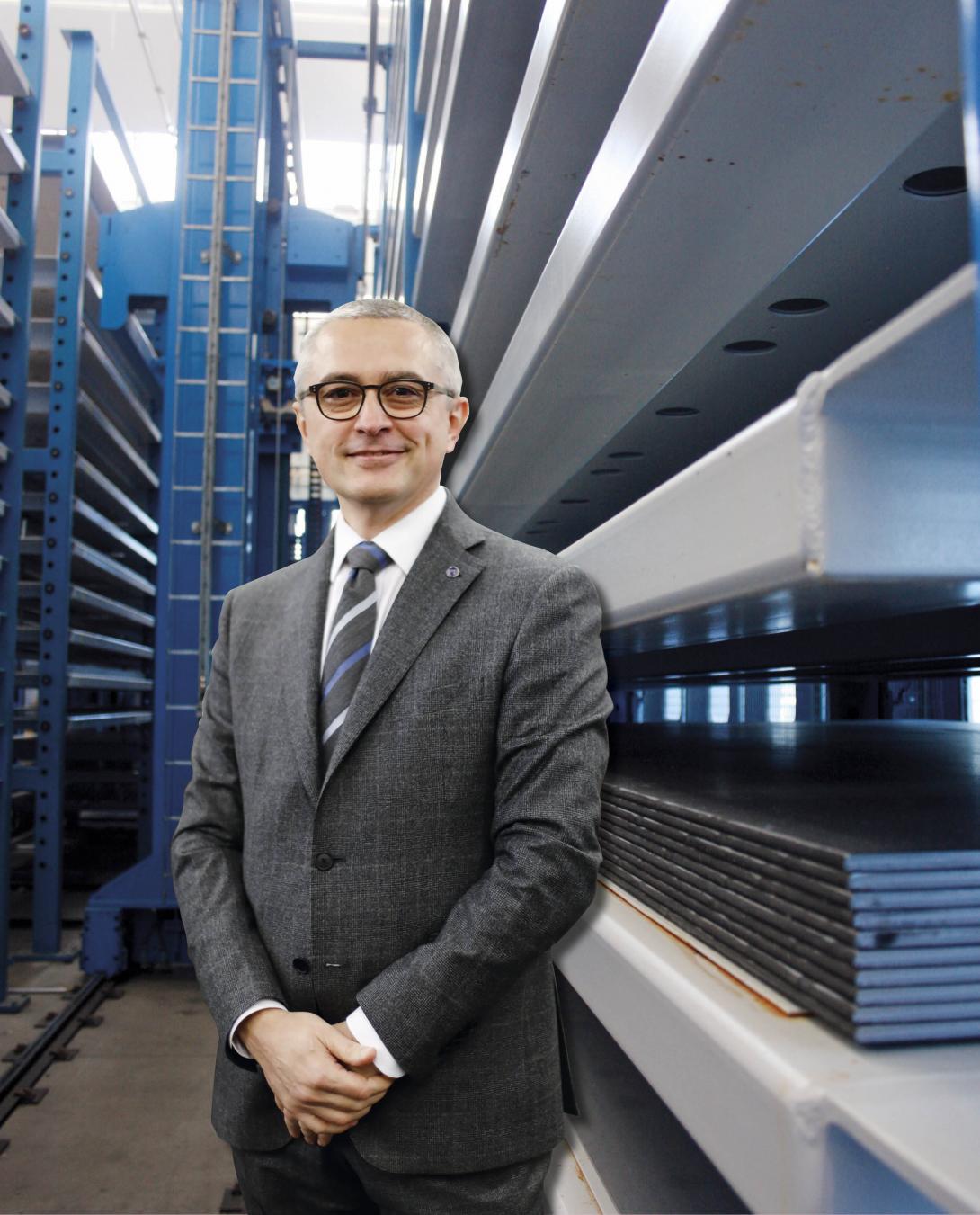 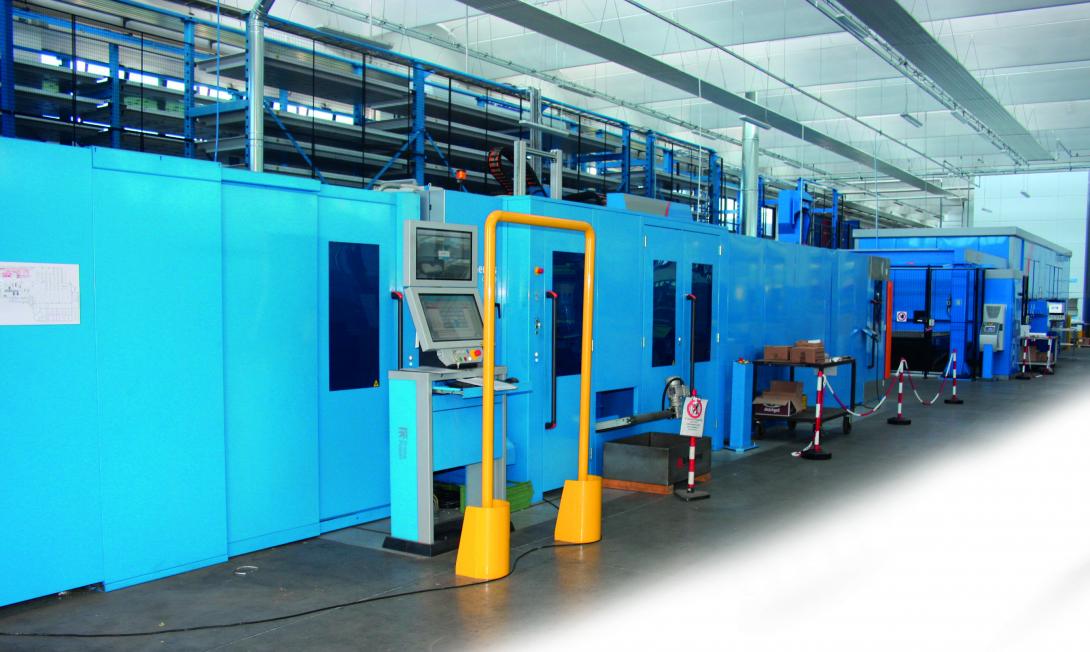 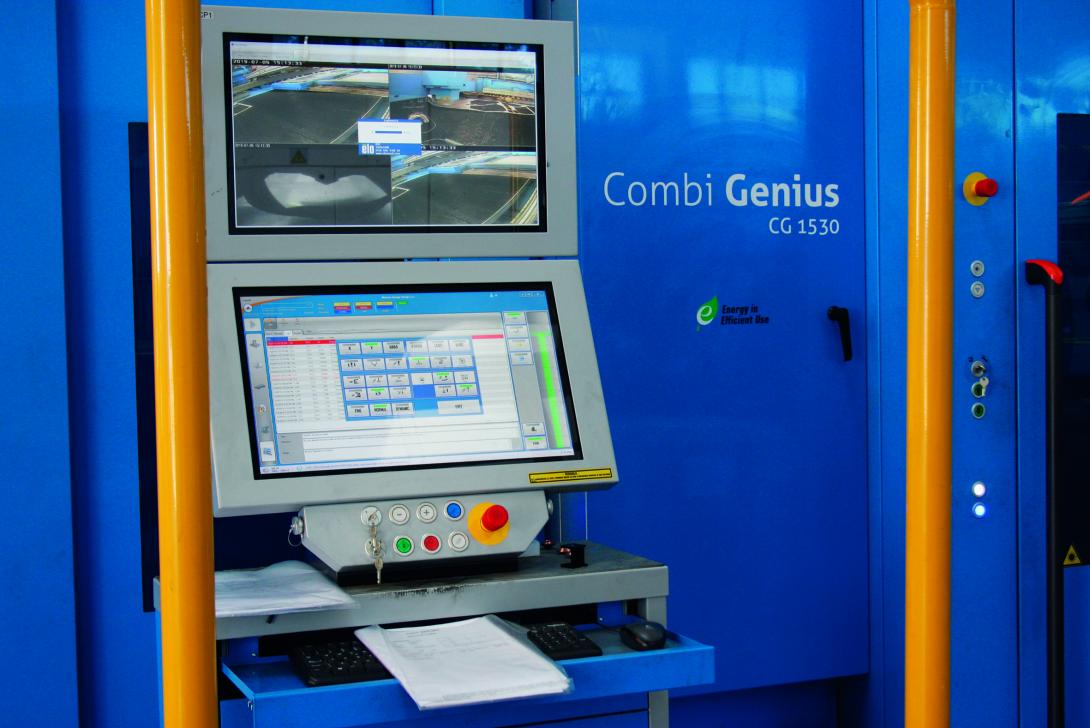 Minerva Omega Group is a well-established all-Italian example of prominence in the industry, with strong investment ability in the design and development of new models, in automated equipment and production lines. “We believe in the quality of work, evidence of a major group commitment carried out by our employees and associates,” explains Salati Chiodini.

“Despite the great difficulties and the competition from countries in which manufacturing has a far lower cost, we defend and support the Made-in-Italy brand with all our strength, without relocating the production of main components and the assembly of machinery from the Bologna and Varese facilities.”

Commitment is significant... and investments, to keep us technologically and qualitatively competitive, are made on a regular basis and involve the entire supply chain. Excellence, competitiveness, and quality are imperative values for us. The company’s ongoing growth across all markets is the best reply to the question of whether it is still worthwhile investing in Italian manufacturing production today.”

Minerva Omega Group’s mission is clear. Some time ago, the company embarked on a path to automating the most cutting-edge manufacturing processes, not only with a view to being competitive but in keeping with the quality standards required by food machinery regulations in force.

“We introduced the first automatic machines in 1984,” says Salati Chiodini. “They were chip removal machine tools as our product previously resulted from the processing of cast bodies. Very little sheet metal was actually used, and its processing was outsourced. Around 1994/95, however, we began to perceive a change in the market. In addition to functionality, a certain aesthetic value was starting to be required for machinery. We, therefore, introduced stainless steel and started manufacturing some machines with this material, while continuing to rely on subcontractors."

"By 1998, we decided to purchase our first laser cutting system -- a Prima Industrie Platino system, with a typical 1,500 x 3,000 mm work area and an automatic pallet changer, thus giving a strong boost to the business. In 2002, we started building these new headquarters where we also installed a Finn Power laser/punch combination solution with a 2.5 kW CO2 source, that we used until last year. It was a choice stemming from a desire to automate the processing cycle as much as possible, which is why we decided to combine the machine with a Night Train FMS storage unit featuring 10 towers with 12 drawers.  This was an innovative and efficient production organization that made it possible for us to give a strong boost to business without a hitch until January 18, 2018, when a fire ravaged our sheet metal department, forcing us to outsource steel processing for a few months. We also started replacing what had been destroyed, putting all the major players in the market back on the table even if, in the end, we preferred to continue along the technological path we had embarked on several years before, and opted for Prima Power, the only system to ensure us continuity after taking over Finn Power. It might seem it was a choice based on likability, but I assure you we really put everyone back into play by analyzing the strengths and weaknesses of each one’s solution. Eventually, being precisely aware of what we needed, Prima Power turned out to be the system that was most in line with our production expectations and our needs also in terms of plant layout.”

“We made a decision under the sign of continuity,” adds Andrea Salati Chiodini. “Also in terms of timing as being able to use the same storage unit allowed us to cut installation times by months. It was a wise choice, consistent with our desire to reduce downtime to as little as possible also because, by resorting to external partners for sheet metal working, one can never really master the situation, in terms of both timing and the quality level our customers were accustomed to.” 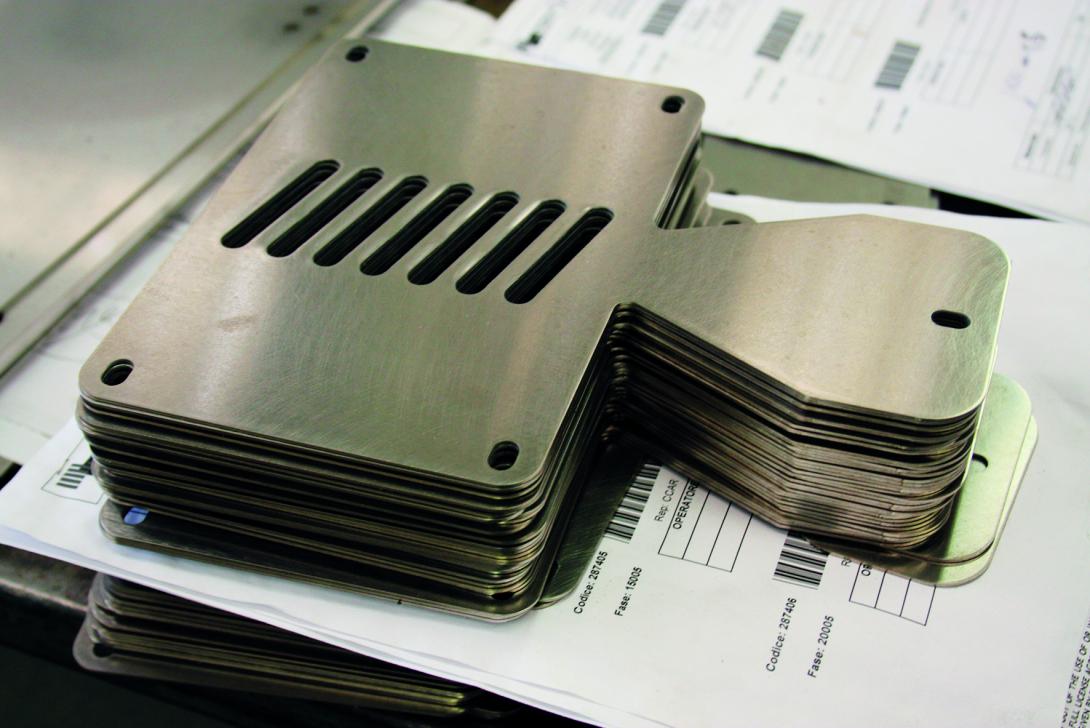 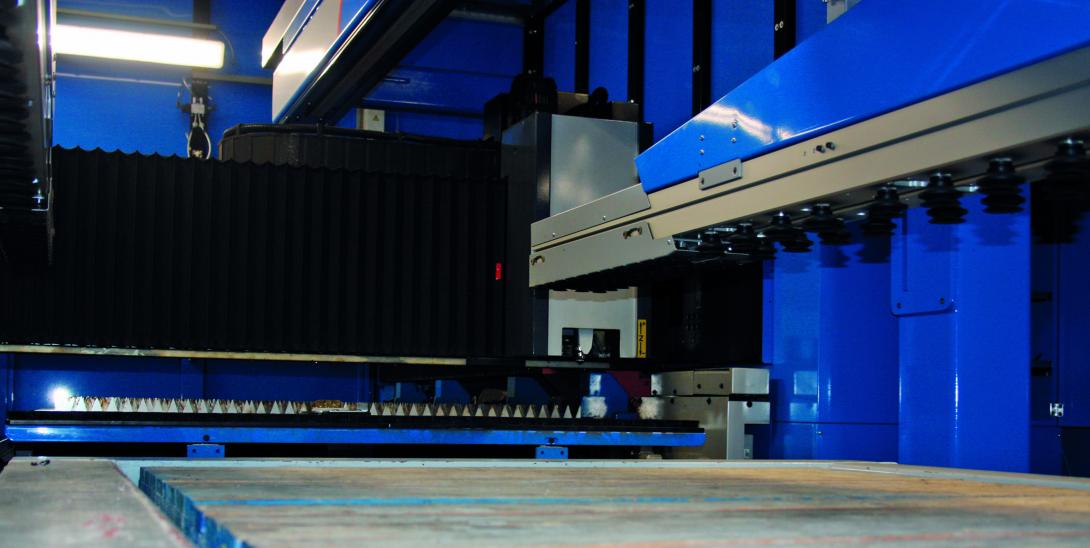 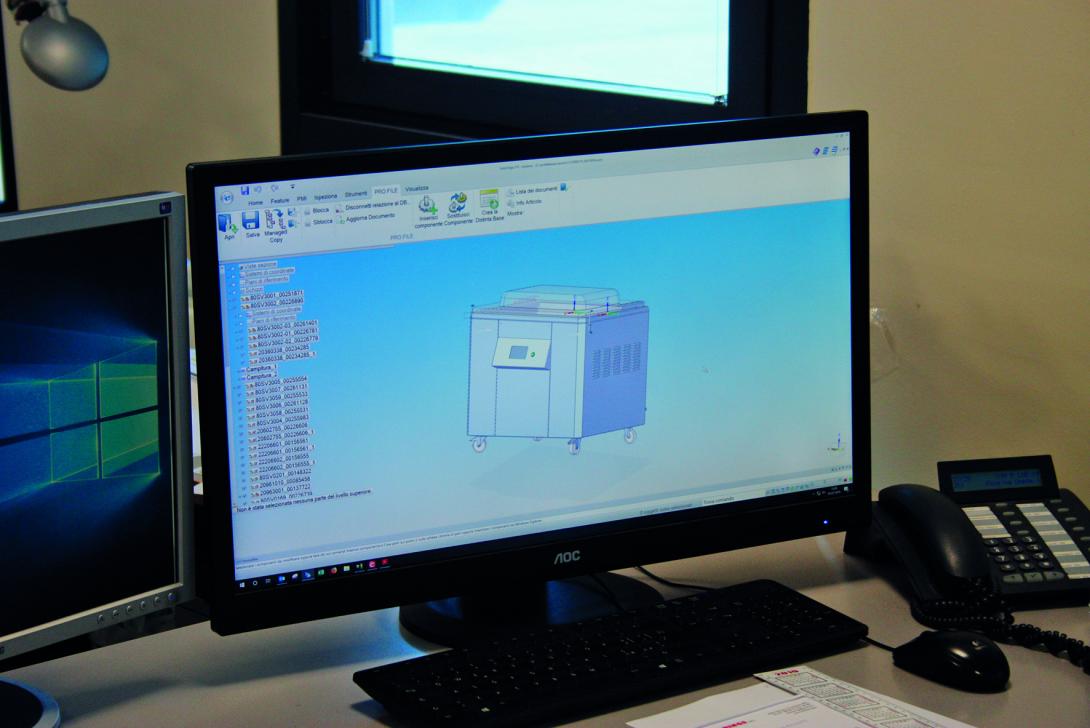 Today, it goes without saying that the new beating heart of Minerva Omega's production is still the Night Train, consisting of 14 blocks and 200 drawers, which stands out as state-of-the-art in the field of automated storage units. It is connected to the punching/laser cutting machine Prima Power Combi Genius 1530 with 4 kW fiber laser and LSR6 loading/unloading and stacking robot, as well as a two-dimensional fiber laser cutting system Prima Power Laser Genius 1530 with linear motors, equipped with a 6 kW fiber source, LU sheet metal loading and unloading robot and LST automatic sorting and stacking robot.

“We speculated on four layouts, as we tried to optimize the system according to the available space by recovering, where it was possible, even just 15/20 cm to improve every little detail, such as forklift passage or swarf unloading flows, or operator access doors,” continues Salati Chiodini. “In this regard, I would like to underline Prima Power’s great willingness and tailoring ability in managing to create a truly tailor-made product, since they did step into our shoes to better understand our issues, and never suggested shortcuts in terms of standard solutions. They immediately understood the importance of offering a totally automated production system, capable of turning out a semi-finished product that is immediately ready for the next steps. Sheet metal is fed in, and the finished product having the level of finish we require is fed out. To us, this has always been a winning aspect and the result of being used to working 24/7. Technology has reached such a high level of reliability that we can launch a nesting on a Friday afternoon, and on Monday morning get all parts ready to be sorted out in the bending area – where a Prima Power eP-0520 servo-electric press brake machine was also installed – and in the assembly area; this is an essential aspect for us to be able to plan our work, reduce downtime, and minimize rejects.”

Today, the installation layout of Prima Power Night Train makes it possible for Minerva Omega to operate both make-to-order and based on work-in-process inventory with the storage unit, that is also used to store semi-finished parts. Make-to-order processing includes foreign orders characterized by large quantities. An order is entered into the company management system, an estimated delivery date (in line with customer expectations) is generated, and production is launched. MRP handles everything, from orders to trade components suppliers as well as, internally, chip removal and sheet metal cutting operations. Each phase of the cycle is scheduled by means of a planning tool that logically and efficiently manages the workflow on the various machines in the shop, as well as in the various progress steps, up to product assembly and delivery.  As for production launches related to the Prima Power Night Train system’s performance, at Minerva they try to exploit machining nesting processes so as to get the least possible scrap, while optimizing processing as much as possible.

“Having parts that are 90% made of stainless steel sheet, we always manage to create excellent nesting processes that combine the best mix of parts, even consumables, according to the job orders to be processed. We try to gather as many pieces as possible into the nesting so as to get to an 85% sheet filling percentage,” explains Salati Chiodini.

It was also interesting to understand what aspects are considered when deciding whether a workpiece type is to be processed on a Combi Genius or on a Laser Genius cutting system. In this case, Salati Chiodini’s answer was clear and unambiguous: “We only make parts to be cut or thick parts on the laser system, while we use the combination unit to make all those parts that need other work processes such as deformations, threaded holes, embossing, notches, and slots. If, however, I had to draw a comparison with the past, when we had CO2 lasers instead of fiber sources, I would say that the most obvious aspect is perhaps the one related to energy consumption, as we are having quite significant savings if you consider that the combination machine alone consumed about 80kW, while today, with both machines, we do not reach this figure.

The Laser Genius, having higher power, with thickness being equal, manages to get slightly better quality and shorter timing. However, I would say that in both cases, for up to 15 mm thickness, we can get practically perfect cut quality, in line with the provisions of the certifications to which we are subjected. Moreover, having a best-finished cut with no burrs means for us to avoid reworking pieces again to sand or grind them. All this involves a reduction in time and considerable economic advantages with a favorable impact on the end-user customer.”

Translated, edited, and reprinted with permission by Deformazione Magazine, Oct. 2019.

The talent to simplify your work and improve your profit.