Eisenwerk Wittigsthal GmbH invests in a punch-laser system so as to be ready for the digital future.

"We are more a manufacturer of tailored products than a series producer", says Jochen Browa, Managing Director, and together with his wife, owner of Eisenwerk Wittigsthal GmbH in Johanngeorgenstadt in the Erzgebirge region. The company, with its focus on system hardware for building installations, does a lot of sheet metal processing in any event, so it was logical to expand into sheet metal-related contract manufacturing. To this end, Eisenwerk Wittigsthal invested in a Combi Genius punch-laser system from Prima Power last year.

The name Eisenwerk Wittigsthal may be familiar to people in East Germany, not just because the company has been in existence for 366 years, but because it was the largest supplier of wood-fired enamel water boilers in the 1980s. Anyone who wanted to have a warm bath in former East Germany relied on these boilers. At times, up to 250,000 boilers were produced annually and more than 4 million units were sold in total. Shortly before the fall of the Berlin Wall, preparations had been made at the Johanngeorgenstadt plant to produce components for the East German Trabant minicar – but nothing came of that.

After German reunification, orders dropped dramatically and the company had to wait until 1992 to be completely restructured and realigned, following its takeover by entrepreneur Winfried Friedrich. Eisenwerk Wittigsthal developed into a supplier of pre-assembled building system solutions with its core business being measurement, distribution and control systems. These measurement systems and distributors are installed in surface-mounted or flush-mounted sheet metal cabinets. When Winfried Friedrich retired in 2008, Jochen Browa and his wife took over the company. They bolstered their work in the ventilation sector, pushed ahead with contract manufacturing in the sheet metal sector and developed the company into a business that today employs 60 people and generates a turnover of around €10 million per annum.

During our tour, Jochen Browa showed us the 55.000 m2 area. Our first stop was at the production facility of the wood-fired water boilers that is automated with the technology of the time. Once or twice a year, the presses and the enameling line are started up for about seven weeks to produce the 3,000 to 4,000 water boilers, which are still in demand today. After all, 10% of company turnover comes from this – a small but nevertheless significant share, with 75% of turnover deriving from building systems hardware. The remaining turnover is shared by ventilation technology and contract manufacturing in sheet metal.

"We have about 5,000 items on our price list," says Jochen Browa with a smile, "however, customers often order 5,000 components that are not on it. Our customers really appreciate the fact that they get tailored solutions from us".

Adaptations include both purely geometric adaptations of standard catalogue solutions and completely new designs. This is proof of the professional competency found in the company, which is also used in its contract manufacturing.

"We have done contract manufacturing for a long time, but on a rather small scale. Our equipment limited us to medium quantities", explains Jochen Browa. A punch-nibbling system from the 1990s made by Finn Power and a relatively new punch-laser combination by Boschert, without automation, were used for this purpose. However, the presses that they already have are also used for orders from the ventilation sector, amounting to 400,000 to 500,000 units manufactured annually.

Jochen Browa sees potential for expansion in the contract manufacturing of larger series and common parts. "For this, however, we need a flexible and automated solution that is also Industry 4.0 capable." Jochen Browa's idea is a configuration app, which a customer can use to design his own unit on his smartphone, sending the order directly to the machine. He estimates that it will take another 10 years to implement the project, however. Firstly, implementation involves enormous costs for a medium-sized company and secondly, his "customers come from a rather conservative industry and do not jump onboard every bandwagon that passes by".

However, the roadmap is now set, and Eisenwerk Wittigsthal GmbH invested around 2 million Euros last year towards this goal. One of these investments is the fully-automated punch-laser system from Prima Power. "First, we only bought the punch-laser system, but then the interfaces to the warehouse and the bending machine followed." The fully automated punch-laser bending line will be implemented as soon as the products are available. 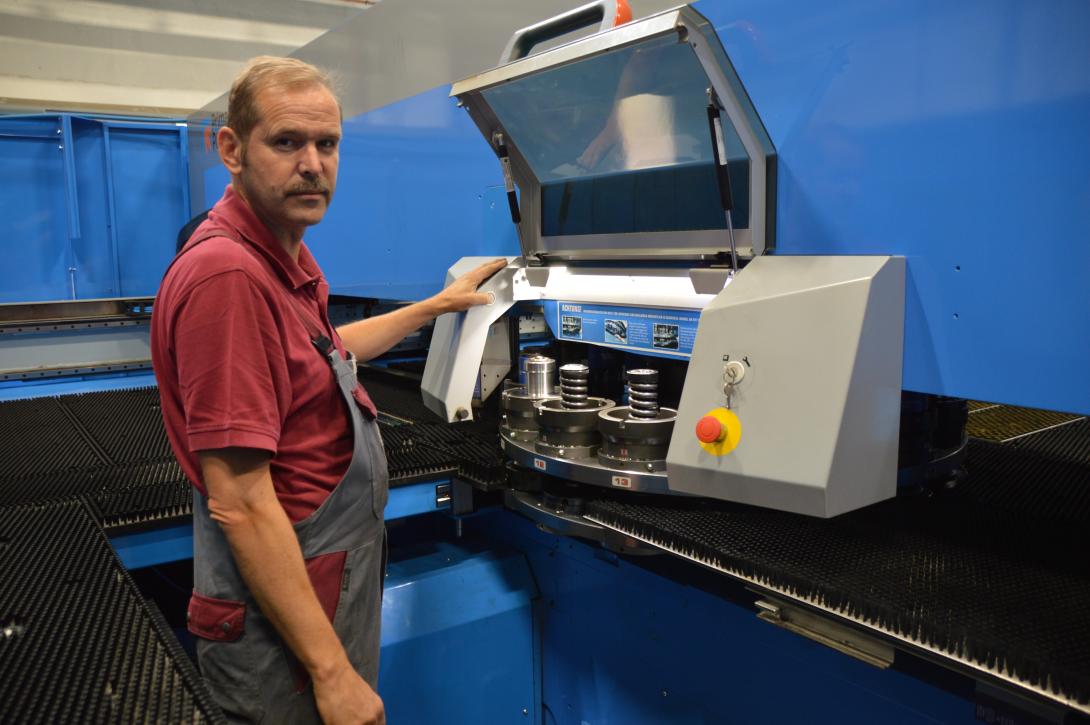 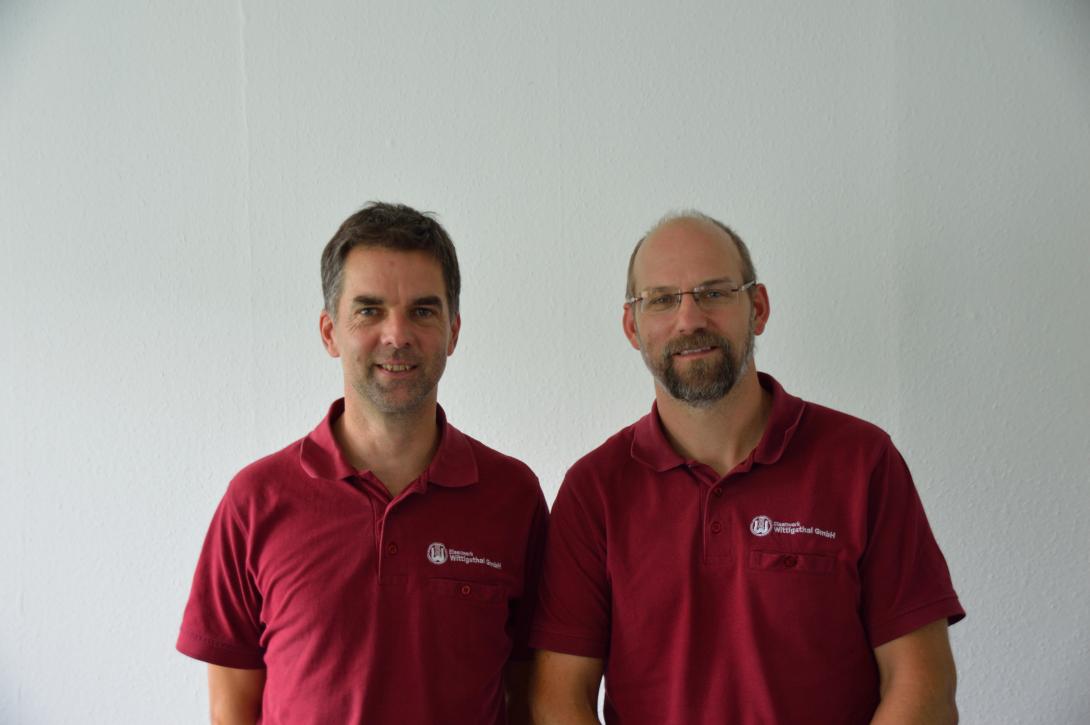 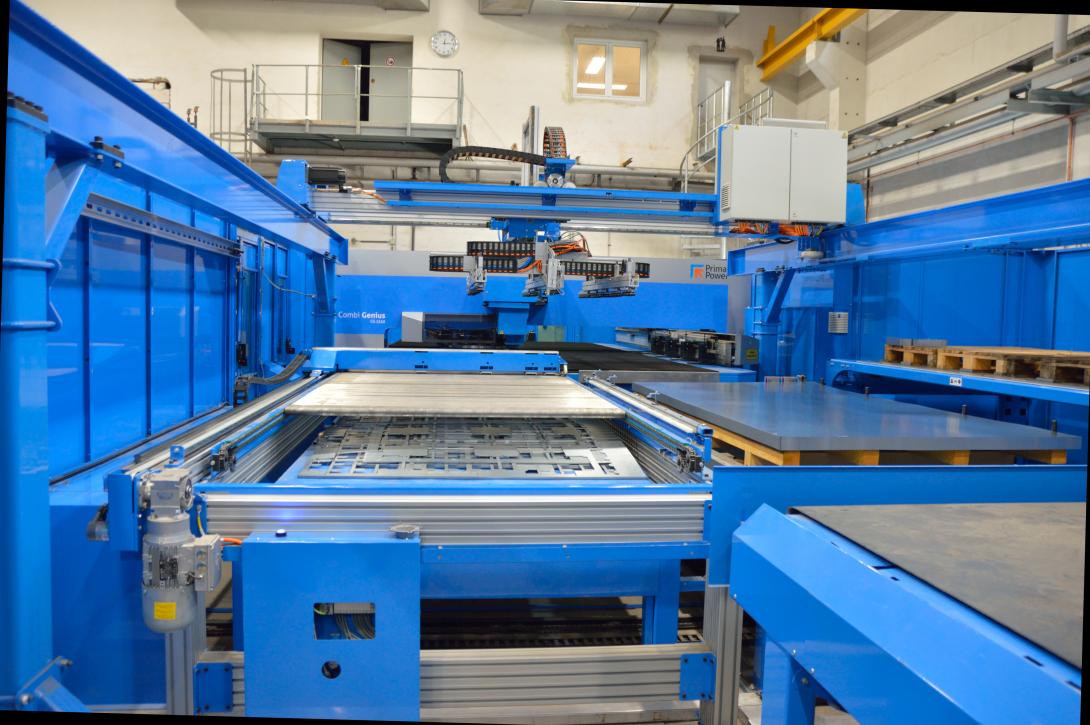 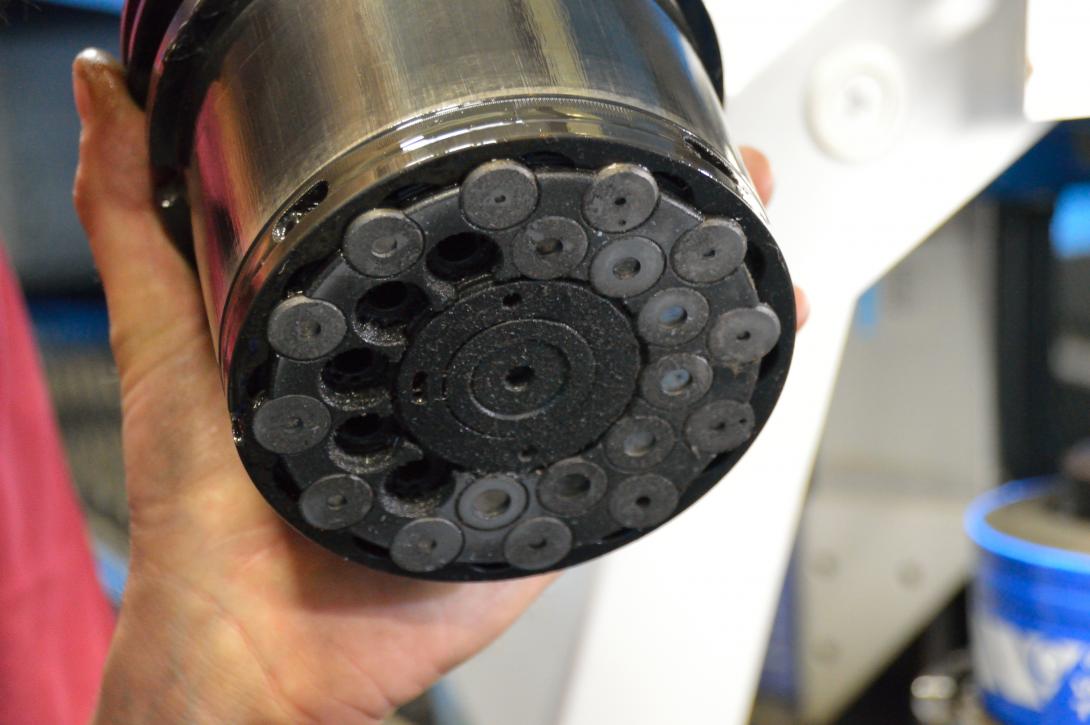 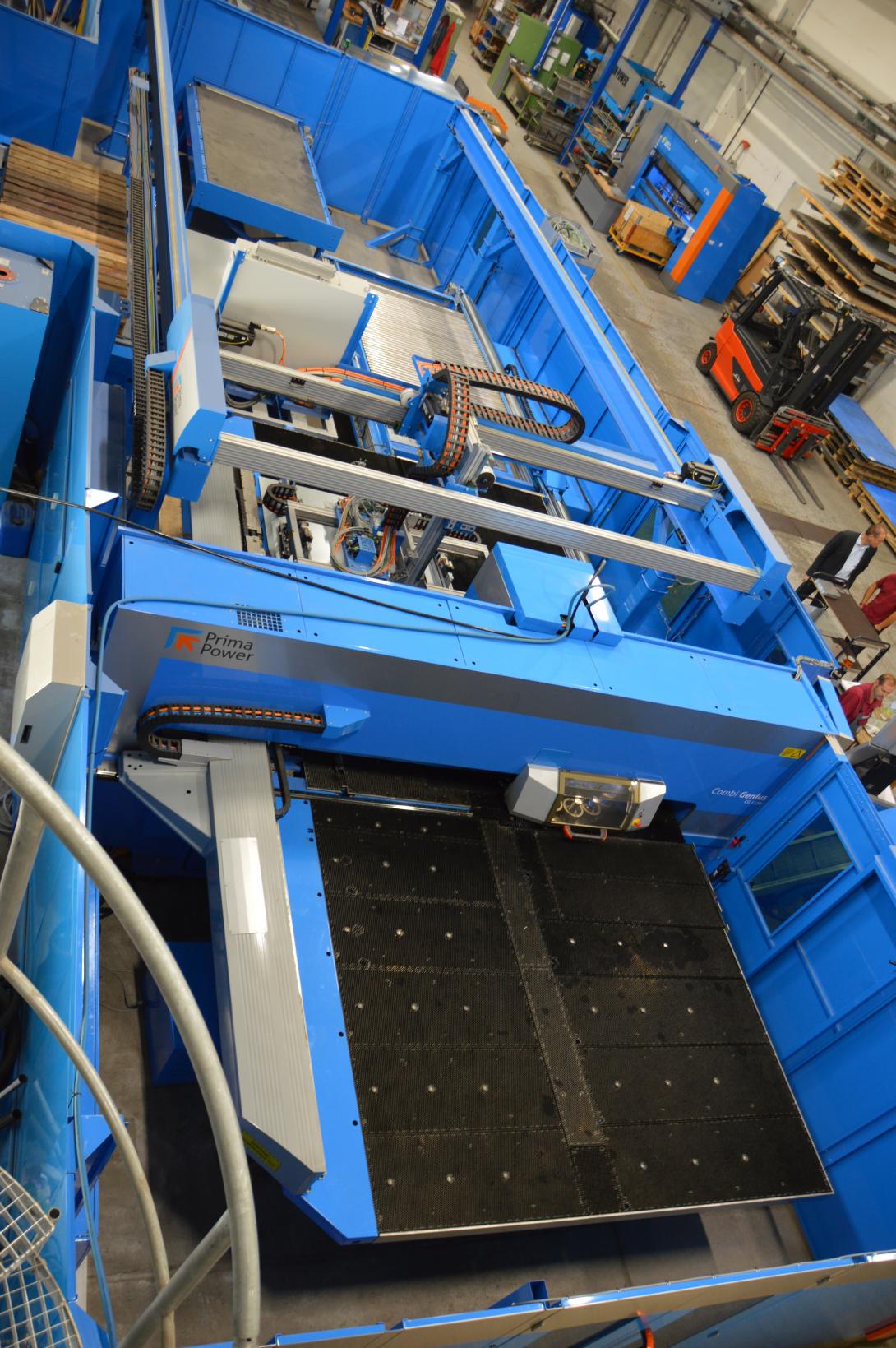 The planned new plant is also the result of many years of partnering with Finn-Power, now a company of the Prima Power Group. "We have worked with a punch-nibbling machine from Finn-Power for more than 20 years. For this reason we had contact with Prima Power. We were satisfied with the system and after 23 years in operation, we were even able to resell it fit for production," says Jochen Browa. Of course, they obtained various quotes before the investment decision was made, and price also played a role. "But in the end, after two visits to Prima Power in Finland, I was confident that the automation would work as assured."

"A combined punch-laser system fits our product best, which includes forming, embossing and threading and often many holes in the components", explains Robert Wiegand, head of production at Eisenwerk Wittigsthal.

"In the ventilation sector, for example, we also have multi-hole parts which we sometimes use nine-hole tools for – tools that punch nine holes at once. In this application, even the fastest 2D laser system can't keep up." In order to make optimum use of the system, Robert Wiegand has a simple guideline: Holes and inner contours are punched, outer contours are cut with the laser system.

The Combi Genius system at Wittigsthal uses a punching tool turret with 16 index positions and a laser head including a 3kW fiber laser system. All axes are servomotor driven and CPC controlled. The punching station of the machine is equipped with an intelligent ram including a rotating pusher pin for quick tool changes.

A total of up to 384 simple or 128 rotating tools can be stored in the turret. "For this purpose, we can continue to use all tools from the old system, including the costly embossing tools", explains Robert Wiegand. Additional special tools as well as multi-tools are provided. Both the old multi-tools and rotatable multi-tools can be used. A force of 300 kN is available for punching. Roll beads, gills and similar shapes can be formed up to a height of 15 mm.

As is the norm in punch-laser systems, the sheet metal is held by clamps during processing and moved along on brush tables. Punching and laser cutting heads remain in their fixed position. The brush tables are designed for metal sheets 250 kg weight. Program-controlled brush segments in front of and inside the punching tool turret provide additional surface protection of the sheet. Three clamps hold the sheet, and a CPC adjusts the position according to the work sequence, so optimal sheet utilization is possible without repositioning.

The laser system used is a 3 kW CF resonator system made by Prima Power. The optimized cutting head, the collimator, beam guidance and cutting parameters ensure high cutting quality and speed. Various devices simplify operation of the laser system. These include the LPW lens protection glass, which prevents cutting dust and dirt from settling on the lens, and the LPM laser plasma monitor, which tracks the cutting process and automatically restarts the system if necessary. In addition, a sensor monitors the lens and lens quality. 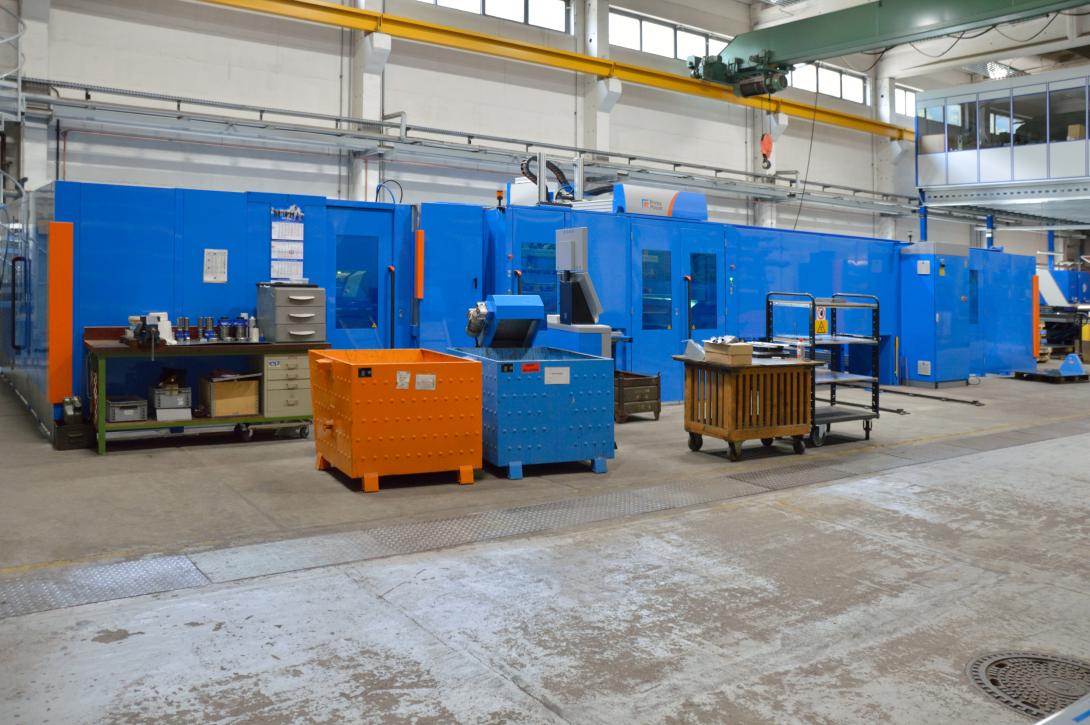 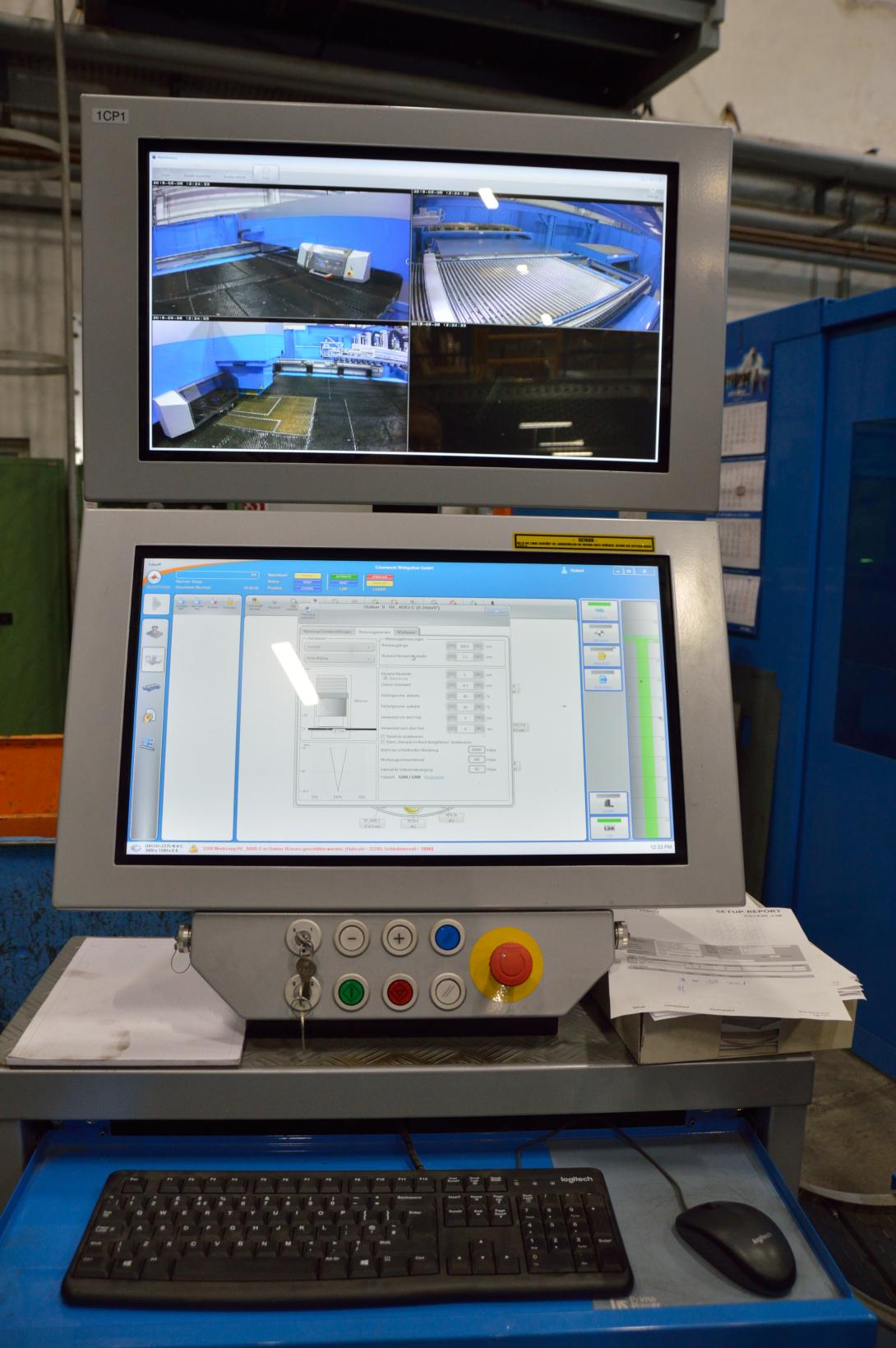 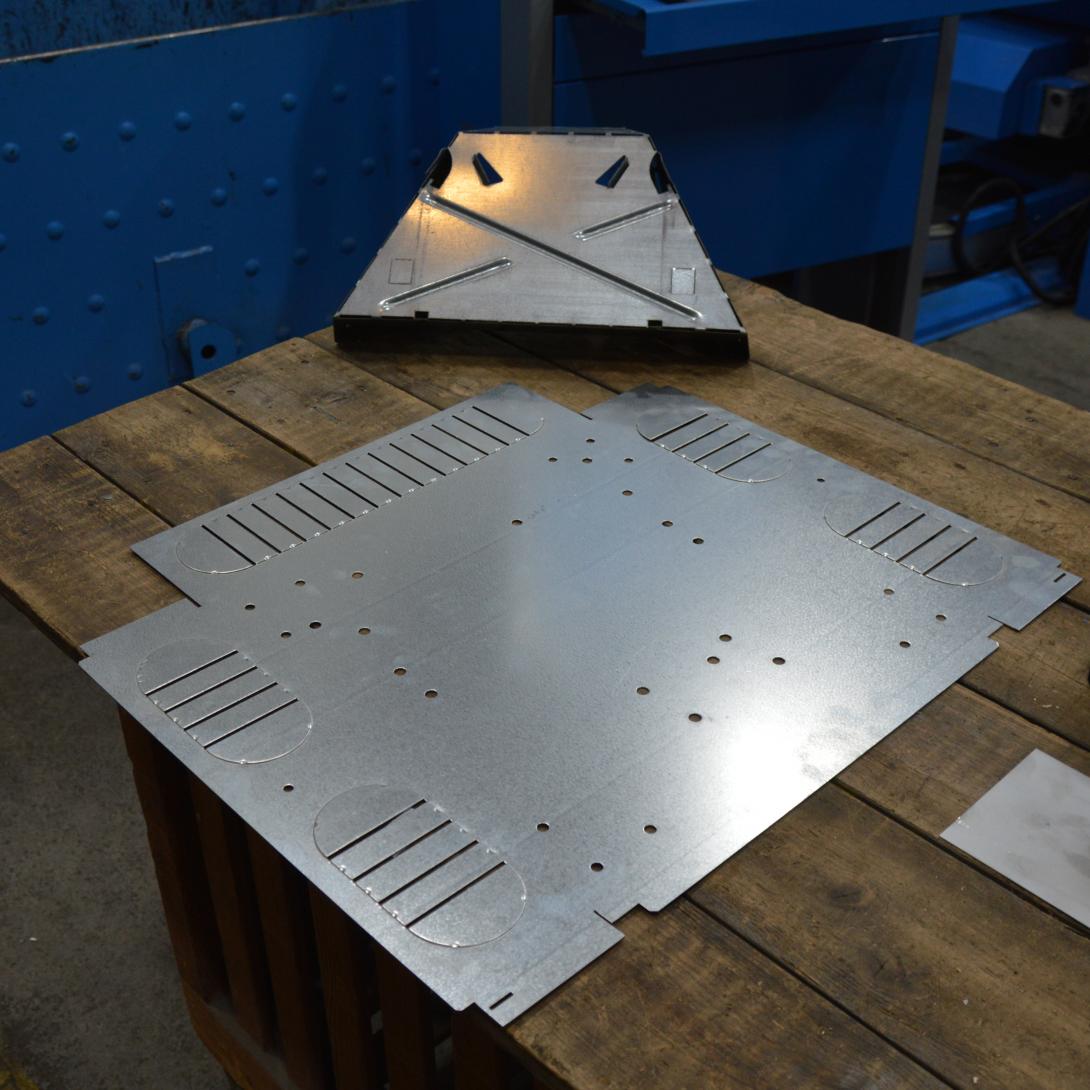 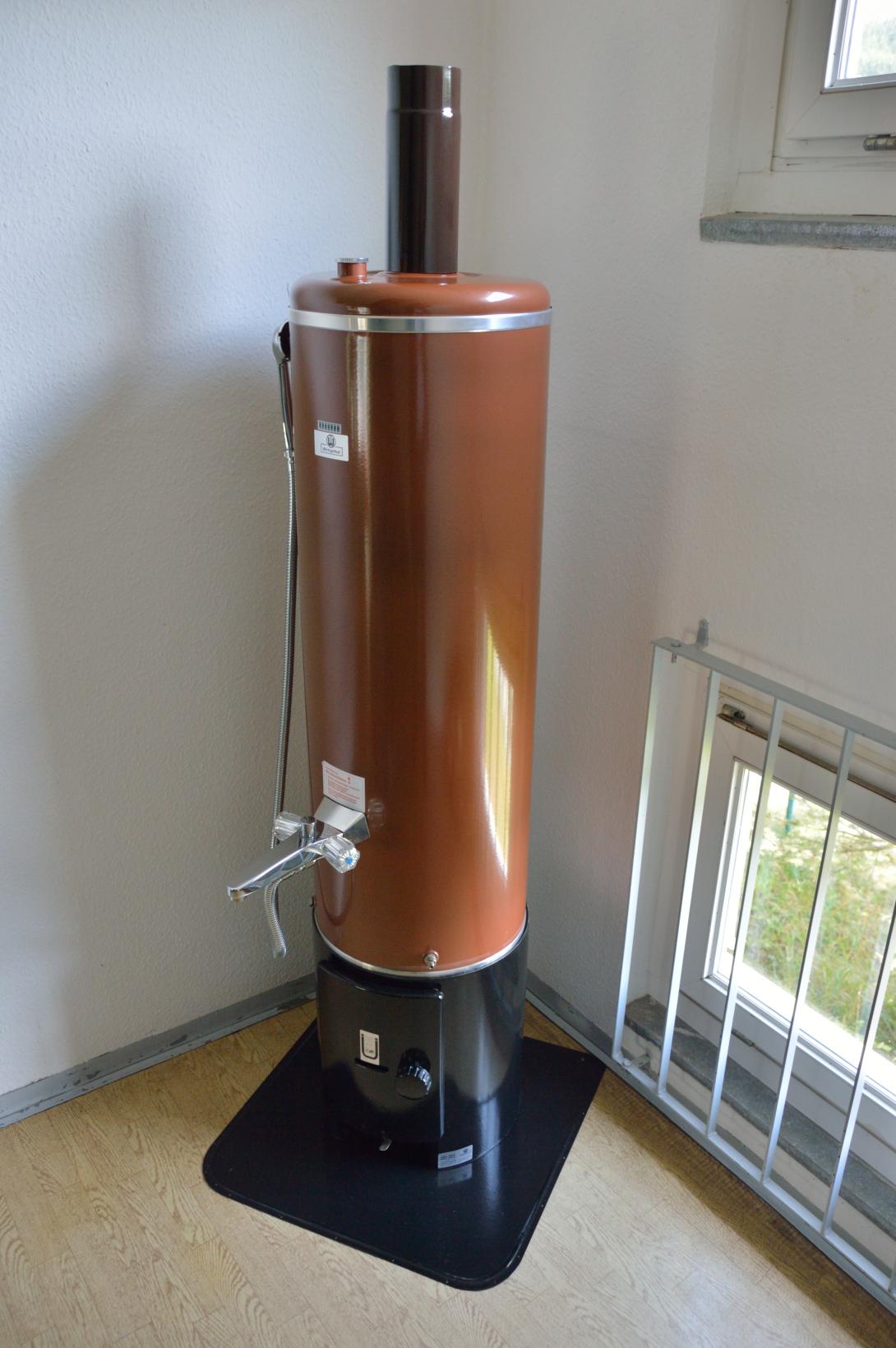 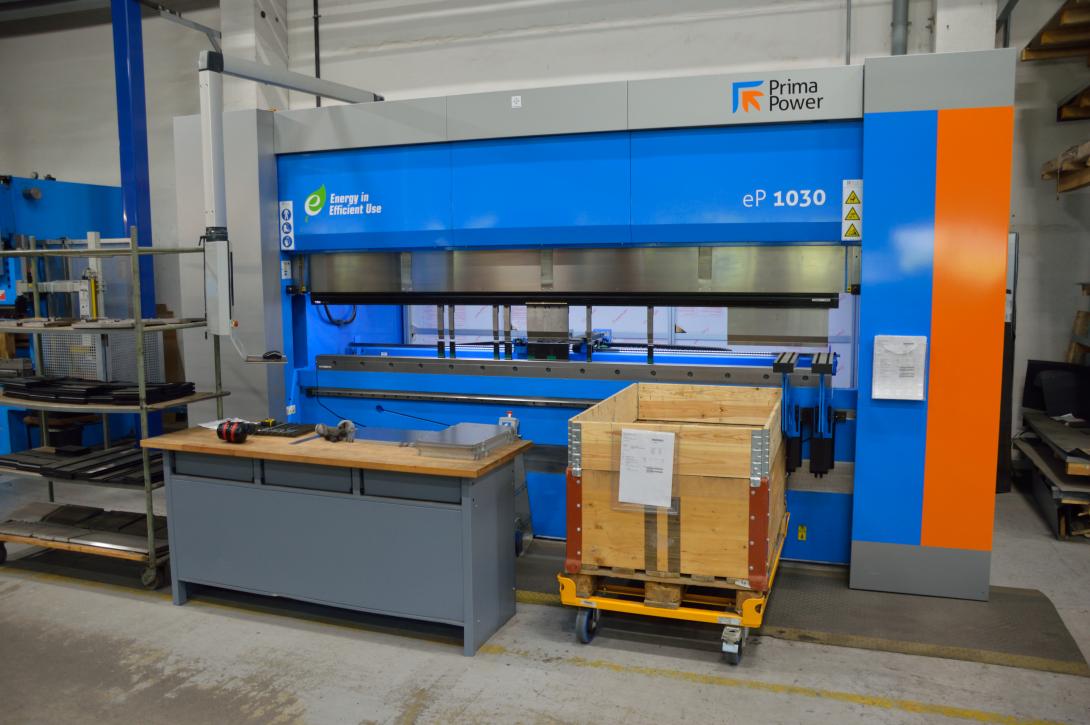 Punched parts are unloaded via a 500 mm x 500 mm parts flap. For laser parts there are two parts flaps at 300 mm x 400 mm for fast sorting, and 800 mm x 800 mm for bigger components. Most parts, however, are loaded and unloaded by a Cartesian robot with a highly flexible system of suction beams.

Packs of sheets are brought into the machine’s working area during production time. Then, the Cartesian robot fully handles loading and unloading. It picks up the sheets one after the other, aligns them and moves them to the punch-laser unit table. Parallel to loading, the remaining sheet grid is removed from the working area and deposited under the raw sheets stack.

In cutting mode, the Cartesian robot removes the finished components directly after the last cut and stacks them at predefined coordinates. Two tables are available for stacking. Theoretically, the machine could also be manually loaded with sheets up to 5 m long.

"We were also persuaded by the system’s simple operation", says Robert Wiegand. "This applies both to direct operation at the machine and to programming. You get used to the system rather quickly even without a lot of background knowledge. If you know the principles of punch-nibbling, laser cutting and CAD basics, it's surprisingly straightforward despite the complexity of the system."

The Combi Genius system is operated via a touch screen control panel. The operator can check both machine settings and job lists. Four cameras control the interior of the system and monitor the machine process. The operator has a clear view of the tool turret with all tools used, as well as the settings of the laser head. A tool management system is also available, which, for example, records the number of completed strokes and displays pertinent maintenance instructions.

The operating system and the NC Express e3 programming system work together seamlessly. You can either use a barcode reader to enter job orders created by the NC Express e3 into the job list, or the Task loader selects them automatically from the database and inserts them into the job list with all the required additional information such as NC program, tool or material.

"We had considered using a programming system that enables us to program all the machines," recalls Jochen Browa, "however, we decided to use the Prima Power system because of its reliable timings."

Robert Wiegand adds that over and over he is amazed to see how precisely the timings calculated during programming correspond to real production time on the machine, even for complex parts. "This is of enormous importance for high-volume production, where often a cent or fractions of a cent make the difference." And since it is precisely for such cases that stable automatic operation is vital, he adds: "The machine mainly operates automatically without intervention. If the NC programs are properly set up and tested, then the machine may run until the stack of sheets in the machine is used up without having to do much checking."

The fact that the Combi Genius system may also be operated via smartphone is another indication that Eisenwerk Wittigsthal GmbH is moving towards digitalized manufacturing and industry 4.0. Jochen Browa is definitely looking at expansion to a fully interlinked punch-laser bending line.

We have about 5,000 items on our price list, however, customers often order 5,000 components that are not on it. Our customers really appreciate the fact that they get tailored solutions from us