When Randy Williams opened his job shop, he was already a seasoned fabricator. “I grew up with metal fabrication,” explains Williams.  “My dad was an aerospace engineer who built trampolines part-time when I was 10 years old, and I helped build parts in the basement.  His business evolved into making ferris wheels and other portable amusement rides, but eventually the liability insurance became too challenging for the small company.”

Williams eventually opened his own job shop in 2001 with just a laser and a press brake.  As the company grew, he incorporated in 2007.  Today, Lasertech Metal Works is transitioning from a 40,000-square-foot building in Fayetteville, GA to a 60,000-square-foot facility in Peachtree City, GA, with plans to add another 20,000 later this year.

“I was looking at benders for about eight years,” says Williams.  “I knew that I wanted a bender, but having the volume to keep it running was a big factor.  By 2019, our customer mix created an optimal time for justifying the bender.”

Williams conducted extensive research prior to his purchase.  “I went on a few tours to see other bender installations at other customers,” continues Williams.  “I was impressed how Prima Power worked with its customers to integrate the Prima Power equipment into the customers’ existing equipment...and it didn’t matter how old it was.  Other machine builders were giving me a window of a few years on the age of our equipment. We looked at other bender builders, but we needed the flexibility of Prima Power.” 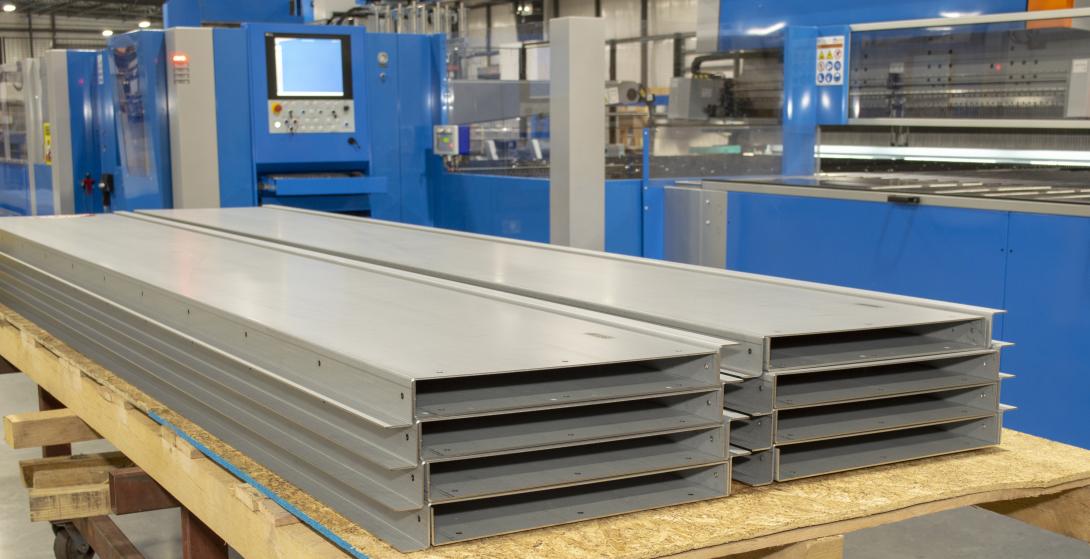 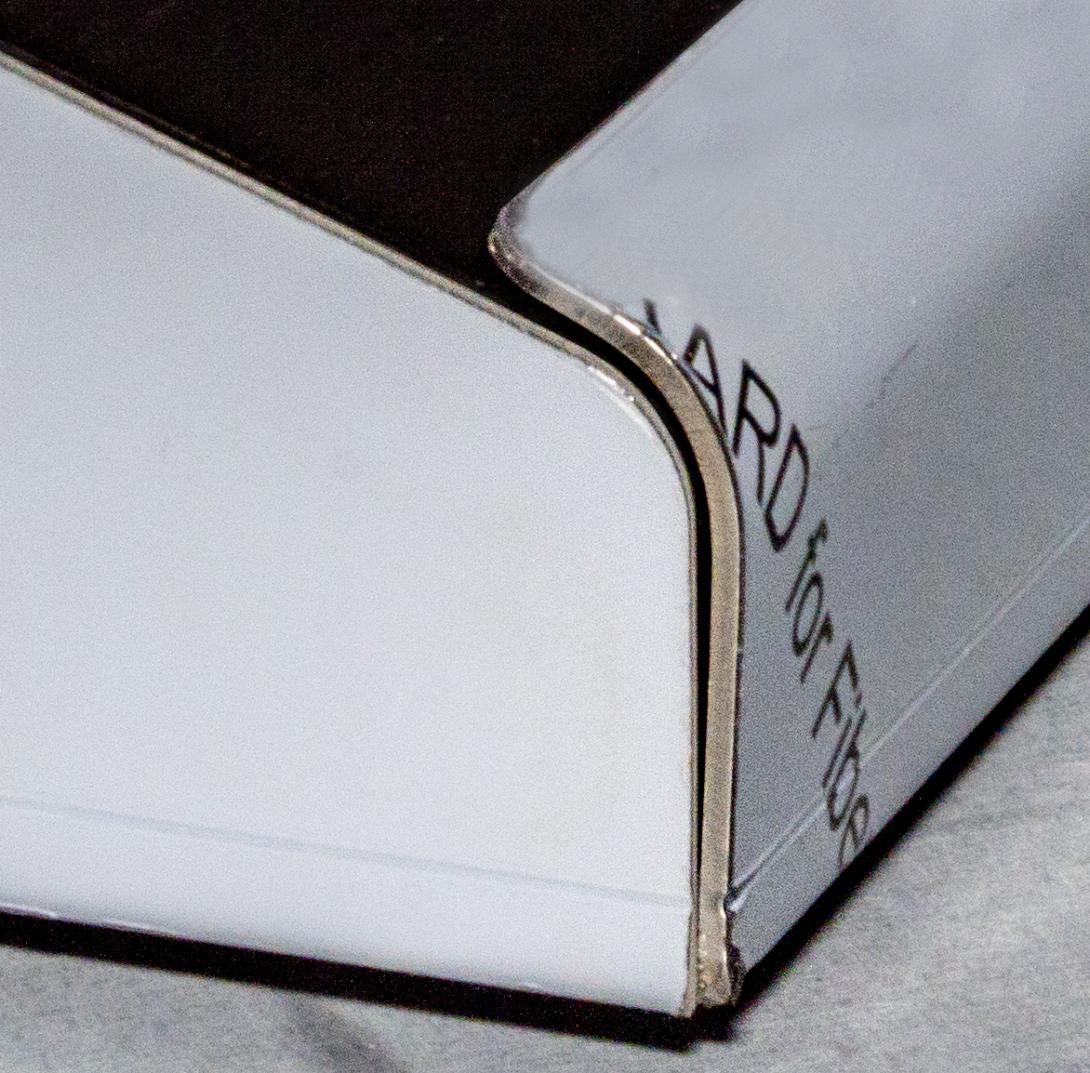 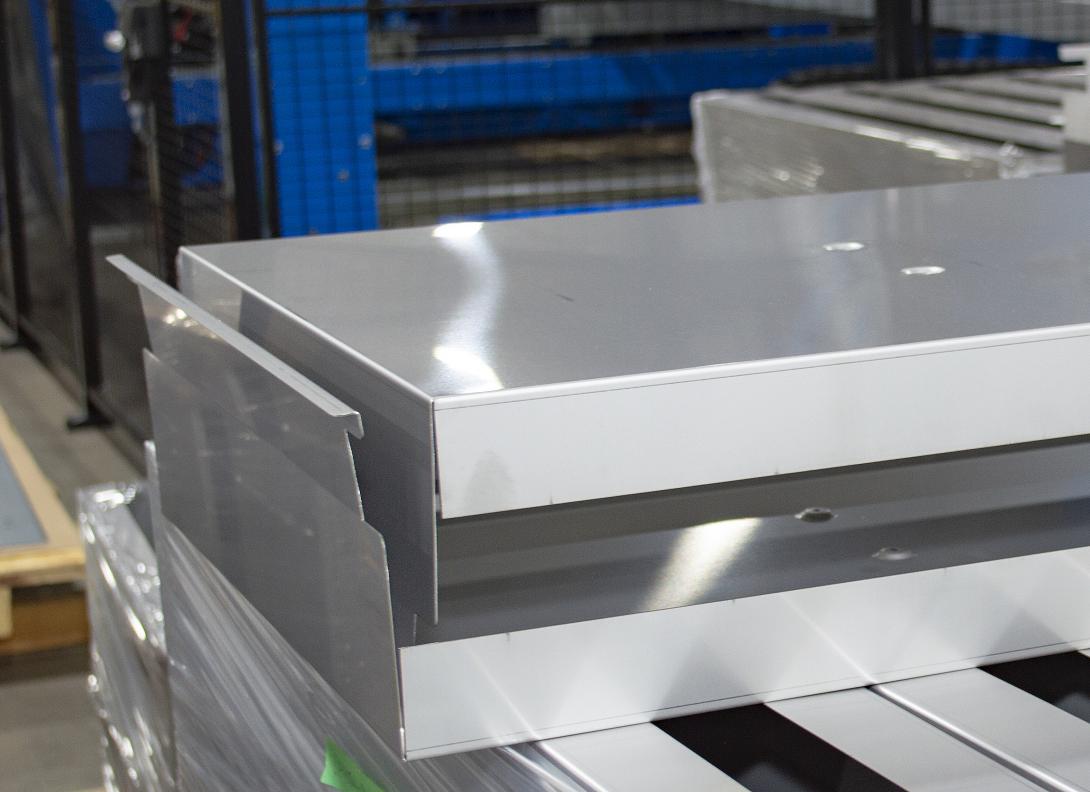 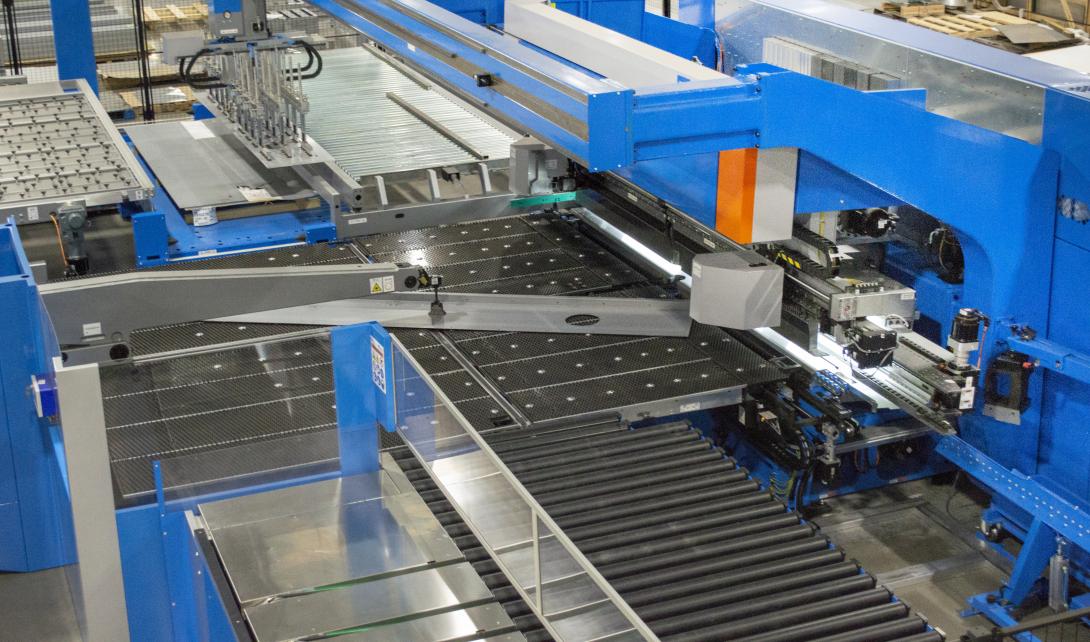 The EBe servo-electric panel bender is a bending solution that is designed specifically for each fabricator’s production requirements to achieve maximum productivity, quality, and repeatability. The bending operation is fully automated, from the loading of flat punched parts to unloading of the finished product. The EBe is available in models with a bending length up to 149” (3,880 mm) and a maximum opening height of 8” (203.5 mm). The new construction features actuations of the bending blade movements (vertical and horizontal) by NC servo axes instead of hydraulic cylinders. The upper tool movements are also made by another NC servo axis. Prima Power EBe provides the high bending quality required in demanding applications. The quality is achieved through precise control of bending axes, fast and smooth bending motion, programmability, and rigid construction that is immune to variation in thermal conditions.

“The EBe features that immediately attracted us were the automatic tool change, elimination of timely set ups, the ability to kit, and the automation,” says Williams.  “The ability to bend large panels was another major factor in our decision. Prima Power was the only bender that could handle 12’material while maintaining flange height and gauge capability. These large parts can weigh up to 120 lbs.  Before the Prima Power Express Bender it would take five people with the press brakes hours to complete the job...now it takes two people minutes with the Prima Power EBe. Software was also another driving factor.  The software is very intuitive and easy to process.  We also liked the servo-driven machine compared to the hydraulic.”

An increasing number of fabricators are facing a situation, where large volumes are being replaced by the need to produce small batches on a just-in-time basis. In traditional bending with brake presses, setup times, technical limits in producing sophisticated components and the requirement for skilled personnel may prove problematic in such manufacturing tasks. Based on extensive experience applying servo-electric technology in automatic panel-bending solutions, Prima Power offers an automation solution which focuses on setup rather than material handling. With options ATC (Automatic Tool Change) and barcode reader, the machine makes the setup automatically and activates a new part program.

“The EBe has given us the ability to be competitive on jobs that were previously out of our range, such as a part with multiple setups,” explains Williams.  “For example, we had this one job with a part that we build that has this challenging radius on the front on one bend that required two set ups.  There was no way around it.  We took on the part because it is one of our largest customers, and the part grew and it became more of a frustration point for us.  On the EBe, however, we can accomplish the bend in one set up. Large parts with negative bends are a huge factor for us. These parts have to be flipped and turned which takes a great deal of space, energy, and manpower to perform.  The EBe just does it in a fraction of the time.  Another challenge was parts with multiple bends.  We have a couple of parts that have 8+ bends...and some of those are negative bends.  These parts were a headache to bend on the press brake because the operator had to form it, flip it, and turn it...and then stack the part. The machine is not running while the operator is trying to stack the part.  With the Express bender, the machine is running while the operator is stacking the part. So the efficiency is just fabulous.  Another thing I really liked about the Prima Power Express Bender is the way they staged their material because they understand that the machine needs to be moving.” 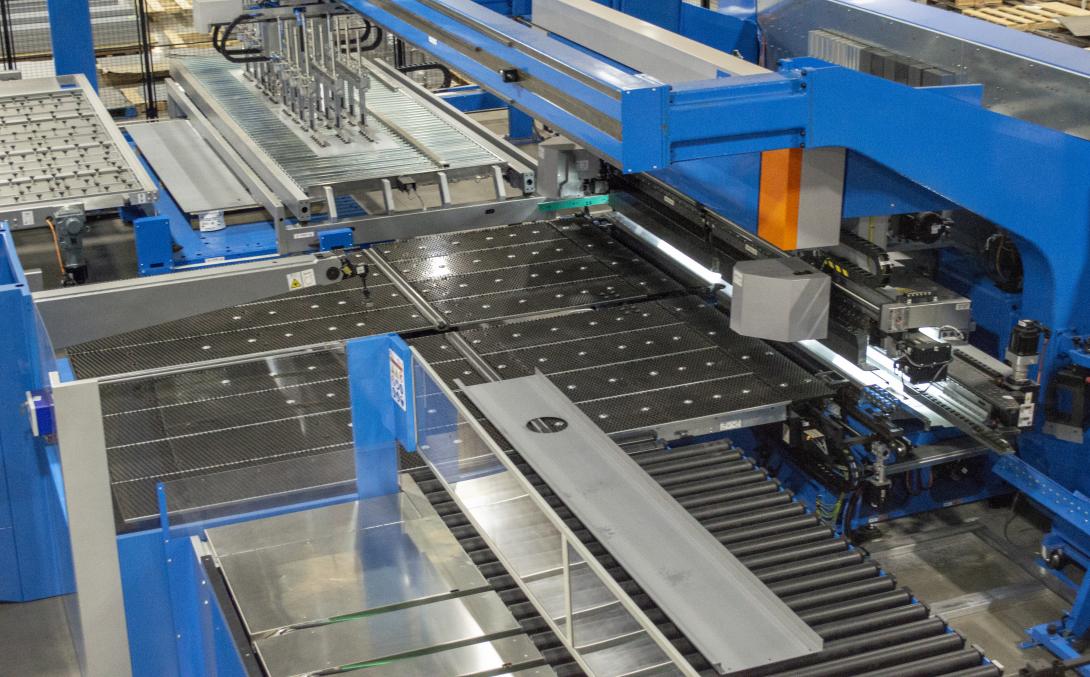 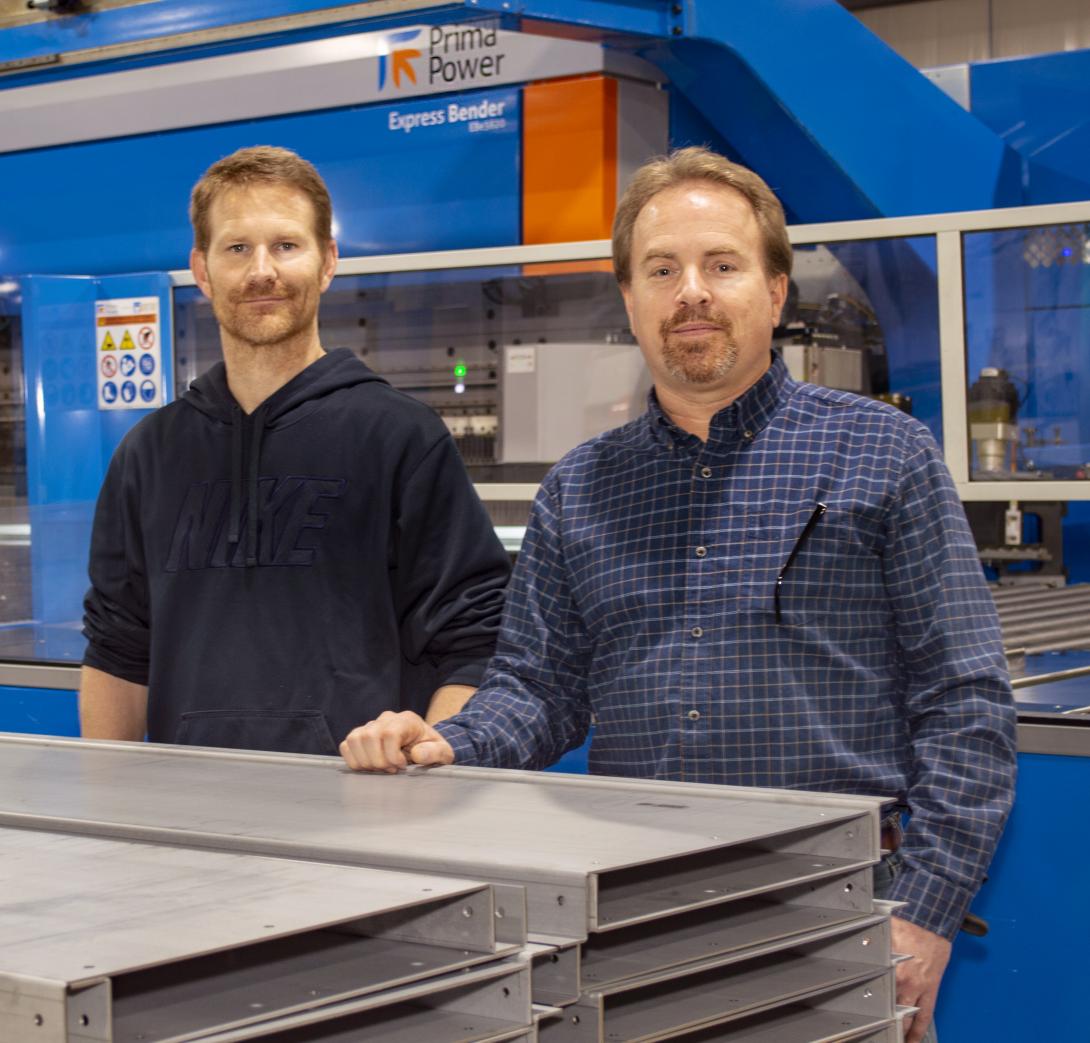 “For the parts we run on the Express Bender, there is no comparison for productivity with the press brakes,” says Williams.  “We are actually having a hard time feeding it because it is so efficient. On the generator enclosures we are bending, it would take four people several days to form these parts on the press brakes.  With the EBe, we do them in less than a day with two people.  As a result, we are also able to repurpose machines to other jobs that would normally be running on the larger press brakes...and the operators don’t get worn out.  We are not staffed to have four people on our press brakes. This was very inefficient and challenging with scheduling production, not to mention the increased quality and consistency in the tolerances in parts with the EBe Express Bender.”

“Prima Power has been very open and accessible with us,” concludes Williams.  “The Prima Power service technicians are always genuine and realistic.  Our goal is to add a Prima Power punch/laser soon.  We are very excited about the future.”

Productivity pushed to the maximum.