Shear and punch fabrication of sheetmetal parts at custom door manufacturer LaForce, Inc. more than triples thanks to implementation of a new servo-electric punch-shear combination machine.

In 1954, Joe LaForce purchased a modest hardware-supply business in downtown Green Bay, WI. Today, his company, LaForce, Inc. has evolved into one of the largest U.S. distributors of commercial doors, frames, and hardware and building specialties. Its products can be found in a variety of office buildings, healthcare facilities, hospitals, nursing homes, clinics, schools, retail outlets and sports stadiums.

In its early years, the company operated mostly as a distributor. By 1969, LaForce realized that he needed to bring door and frame production inhouse, in order to sell with consistent quality and make timely deliveries. Toward that end, the company purchased two turret punch presses, two hydraulic shears and several press brakes to fabricate and bend its products.

Fast forward to 2013, and LaForce began a search for a more efficient and productive way to fabricate its products at the 310,000-sq.-ft. headquarters facility.

“We used to shear the sheet to make blanks, and then punch the blanks into parts,” explains Brad Johnson, industrial engineer and continuous improvement coordinator. “We sought a way to avoid many of the wasted hours required for material handling and nonproductive labor.”

After much research, LaForce accomplished just that with the acquisition of a servo-electric punch-shear combination machine (a Prima Power Shear Genius SGe, acquired late in 2013).

With the punch-shear concept, the objective is to provide a machine capable of transforming a full-size sheet into finished parts. Parts then can be moved to final production stages for immediate integration into final product assembly.

The heart of LaForce’s Shear Genius SGe is a servo-electric 30-metric-ton punching machine with a maximum stroke speed of 1000 hits/min; an index speed to 250 rpm; and a maximum sheet-position speed of 150 m/min. The machine’s right-angle shear boasts a servo-electric actuation system that makes shear movement quick and fully CNC-controlled. It can shear aluminum sheet to 5 mm thick, mild steel to 4 mm and stainless steel to 3 mm.

The machine features automated sheet loading, as well as programmable and automated part removal and sorting. And, according to Johnson, all of that automation enables minimal setup times and lights-out unmanned operations, resulting in finished parts with a dramatic reduction in scrap and manual labor.

LaForce also finds that the punch-shear machine eliminates wasteful skeletons and costly secondary operations such as deburring, thanks to shearing of part edges rather than nibbling. During machine operation, a sheet is loaded and squared automatically without human interference. And, the same clamps that grip the sheet for punching also hold it for shearing. On average, compared with a standalone turret punch press, the SGe reduces total manufacturing time by 60 percent.

“In 2013, we averaged 2209 parts per week (sheared/punched parts utilizing three different machines and 135 manhours),” explains Johnson. “Today, just using the SGe we produce an average of 2630 parts per week using just 48 manhours. The shear and punch processes used to create our parts went from 16 parts/man-hour to 55 parts/man-hour— that’s a 145-percent improvement.”

The punch-shear also has improved quality at LaForce. “Before, we experienced quality issues caused by part variances from our process of shear to- blank and then turret punching,” says Johnson. “With the SGe, the improved part consistency and dimensional accuracy have virtually eliminated our quality issues. The accuracy of the machine has led to savings in other processes as well, such as in press-brake forming where dimensional accuracy from SGe enables faster setup times, and in welding due to improved part fitup.” 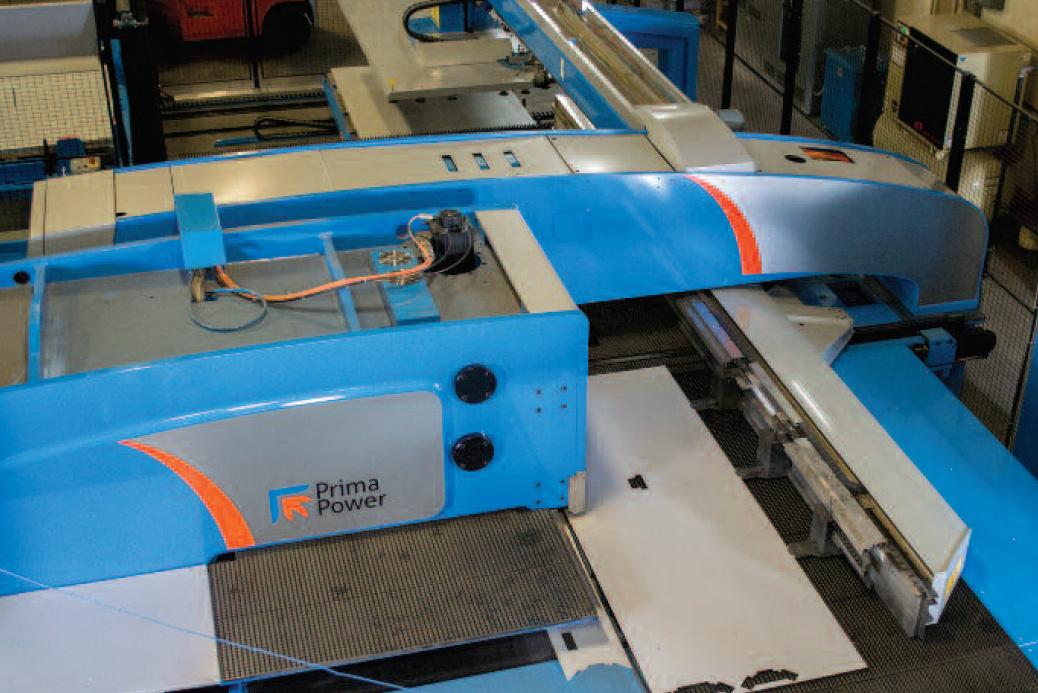 “The SGe does exactly what we thought it would do,” says Johnson. “We vetted this machine closely and conducted a lot of research prior to purchasing it. We initially were looking for a laser-cutting machine, and plenty of people tried to convince us that a fiber-laser was the way to go. However, our parts are long and rectangular,” he continues, “without any contours or circles. We wanted to eliminate the separate blanking operation and find a solution that allowed us to process an entire sheet with common-line cutting, without having to shake out parts at the end. The punch-shear has accomplished just that.”

“As a result, we sold one of our turret punch presses and one of our shears, and now use our remaining turret press and shear as backups. The machine has solved the shear and punch part of our puzzle; our goal now is to examine our forming and spot-welding processes.”

Tool-holder flexibility—Individual tool holders allow fabricators to design their own turret layouts, rather than having tool stations machined into the turret.

Auto Index—The punch and die rotate in their tool holders, in 0.001- deg. programmable increments, and they can rotate beyond 360 deg., providing the shortest path to a programmed angle.

Upward Forming—An upforming option provides accurate forming to 16 mm. And, all dies are at the same height, with minimal risk of material damage and increased machine uptime.